"A Matter of Influence"

One of the major differences between driving a vehicle in the USA and driving in the UK is the path the driver takes to get from point "A" to point "B."  In many of the more modern cities in the USA the roads are laid out almost completely straight at right angles in a grid-like fashion.  If you stand at the top end of 1st Avenue in Harlem, New York, you can look down the street and see (if you have good enough eyes) all the way to Houston Street in The Bowery.  That's a distance of six and a half miles.  There are other examples, but this one works well.  By contrast, with the exception of a stretch of the A15 in the North Midlands of England, almost all the roads in the UK weave from beginning to end.  The motorways between cities are a little better, but not so in town.  Some of the smaller villages and hamlets are no real challenge to anyone who can turn a vehicle around, but get into London, and … phew! … you could spend the rest of your life getting from Piccadilly Circus to the Elephant and Castle.  I kid you not.

Part of the reason London is the way it is, is that the city is composed of fifty historic villages which, over many, many years, have grown across each other's front and back yards.  London's roads were originally established around some ornament of architecture or other: a church; a water fountain; horse trough, or whatever, and once paved, the plot of the road remained.  Drivers through London today find themselves constantly working the steering wheel.

Constant course correction on any type of journey is a must.  Why?  Because of changing circumstances; in the London example — a change in the direction of the road.  But it's not just the east, north or south of the road that dictates the behavior of the driver; even a slight change in the level of the road requires a correction at the steering wheel.  The slightest of breezes across the path of the vehicle can cause a major shift in direction.  Anyone who's ever flown across the continent may remember that a head or tail wind will lengthen or shorten your trip, because of resistance or assistance caused by the wind.

I read about a curious phenomenon once upon a time years ago:  If a ship, sailing on the calmest of seas, should be visited by a common seagull, and that seagull should land on the passenger guard rail of the ship, then that seagull would cause the ship to list to such a degree that an adjustment would have to be made to the rudder.  Admittedly, the adjustment would be incredibly slight, but if left uncorrected, the ship would not arrive at its intended destination, no matter how true the original course.  Needless to say, the greater the length of the journey, the greater the chance of getting off track.  Right here is played out a better argument for the Big Bang Theory than is played out in the favor of Evolution Theory, both of which, by the way, are totally at odds with each other.  Food for another discussion — some other time.

During the few short years of my life I have cut down more than a handful of trees; some large; some small.  Most of the trees have landed where I intended; some seemed to have a plan to do otherwise and that was all there was to it.  Usually those in this latter group take the more time to clean up, having caused somewhat of a disaster.  There is a point in the tree-cutting process where you have at least some control over trajectory, and that is … early on.  If the tree is mainly up and down, then usually just a nudge is all that's needed to cause it to behave somewhat predictably.  In other words: drop where you want it to.  But some trees may be so misshapen at the top that it doesn't matter how big of a wedge you cut in the base, what little we know of the physics of gravity is going to bring that tree down where it tendeth.  If all the weight is leaning out to the left, that's the way it's going to fall.  You can tie a rope around the tree and pull it more or less where you want it, and in most cases that's all you need to do.  Some people won't cut down trees during windy weather, and this is generally a good rule.  But the wind can sometimes help you drop the tree in a place that it would not normally fall.  Gotta be kinda skillful for that, though, because, since we can't predict where the wind will list, it might not blow right when you need it to.

One might think that these simple observations have nothing to do with our lives in general.  But I think otherwise.  No matter our age, we generally have a course plotted for some portion of our lives.  As children, we have very few needs; as long as we're fed, cleaned and napped, all is well.  As we grow, we develop a plan to get our hands on that particular toy or item of interest, in the playpen or on the beach — doesn't matter; if we want it, we want it, and that's it.  We get older, the toys change, but pretty much the mentality stays the same.  Just the playground that gets bigger.

One of the greatest illusions common to man is that we believe we have absolute control over our course through life.  What I mean by that is that we have a goal, that's what we want, and that's where we're headed — everybody get out of the way.  But things rarely turn out the way we planned; it's just the way life goes.  I often tell people the last time I felt I had a pretty good grip on life was the day before my oldest child started walking.  Since then life has been pretty much how I imagined life with children would be: a long series of unexpected events.  There is no across-the-board handbook for parenthood.  We pray for wisdom, patience and a decent portion of good health, and then we launch out day by day.

A little brain diversion here (sort of): Suppose you could dig a perfectly straight hole through the earth from New York to Sydney, and then you jump into that hole.  What might you expect?  Well, here's how the theory goes: at the beginning of your journey you will be descending at an accelerating speed which is dictated by the force of gravity (I forget all the math — doesn't matter).  As soon as you reach the center of your journey you begin to decelerate as you start to go up.  And you keep on going up because of the velocity you have developed from initially being pulled down by the force of gravity.  When you eventually reach Sydney (and you will reach Sydney), your journey will have taken you forty-two minutes.  And here's the really interesting sidekick to this math in action:  If you were to dig a hole from New York to Los Angeles or London or Paris or Moscow, and if it were possible to jump into that hole and travel through that hole without scraping the sides, your journey would take you — forty-two minutes.  The math is so calculable that the duration of the journey may be very accurately predicted.  This same math allows scientists and astronomers to drive satellites and probes through the solar system without hitting anything.

The bottom line: we go through life constantly navigating either around some phenomenon or toward one.  The people we meet act like the breezes, always affecting our path, always causing us to make a decision; sometimes a correction; sometimes not.  The people we love — and the people we don't — make our path to be winding … or not so, and there really is nothing we can do about that.  Perhaps it would be well for us to realize that as much as people have an effect on us, we also have an effect on them. We apply the Balm of Blessing or the Balm of Pain simply by our very existence in the life of another. 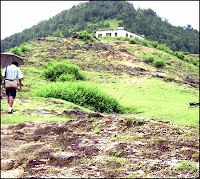 Right now your path may be a rocky one.  Here you are stumbling from one sorrow to another.  Over some aspects of your life you have no control whatsoever.  One day all this pain will end; our Heavenly Father has guaranteed that.  You may not feel very brave at times.  Nevertheless, keep going.  I'm reminded of a few words spoken by … Winston Churchill, I think it was … he said, "If you're going through hell, keep going."

If, by some fortunate set of circumstances, you find yourself living a charmed life, and you have everything you need and more, do take time to look around and see if there is some poor wretch who might benefit from your outstretched hand of offering.  If your situations were to be reversed would you not be praying for some generous soul like you to step into your life?

And never, under any circumstances, underestimate your influence.