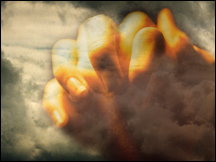 Undoubtedly, life on earth is filled with a long series of tragedies, interspersed with a relative handful of bright spots.  It's interesting to me that it is the bright spots that somehow fuel our fire with more energy than the tragedies have power to take — usually.  But occasionally a trouble lands on our doorstep that is just too hard to bear.  The death of a child, a spouse or a sibling are events in the life which cause pain in the heart that no amount of words can heal.  An immediate sense of loss fills the heart, and starts to cut its way out mercilessly until it reaches the wall we erect around ourselves, spilling over, knocking down and washing away even the foundations of that wall — hope, faith, reason, logic, joy and others.  We hear ourselves mutter the words we promised ourselves we would never say; words that should only come from the mouths of others: "God, why have you done this to me?  What have I done that was so bad?"


Perhaps you've never had that experience, but I personally guarantee you know at least one person who has.

I'm not so sure that it's wrong to think of ourselves as worthy of God's special attention, but I have often wondered why we expect God to do remarkable things for us or protect us from the harms that are common to man, as if He were at our beck and call;  like we have a Hotline to Heaven; like all we have to do is flip out our cell phone, punch in the speed dial number, and "Shazam!" like a genie out of a bottle, God should show up and grant us a fresh three-wish coupon.  Is there a lost piece of parchment somewhere containing a verse of Scripture that says this generation is different from the many that have gone before us?

When tragedy strikes, it is rarely the honest, intelligent Christian who dwells for long on the question of blame.  The question, "Where was God?" is more often simmered over by journalists, and their question/accusation is invariably splashed across the front page.  This strange inquiry excites the shallower mind to begin to mull over, "Well, if God is so good, why would He allow that?" (whatever THAT happens to be at the time).  My particular allergy not-of-my-choice is in the realm of children suffering from incurable illnesses.  If I am guilty of turning my head away from pain, it is manifested here — because it hurts too much to watch.  And when I get my fifteen minutes on the other side, the question of why the innocent have suffered, is going to be aired out … for a whole minute of that time.

At the time of this writing the American nation is recovering from yet one more gun-related incident involving another young, white male with no particular agenda except that of shooting as many people as he can before he either runs out of ammunition or gets killed himself.  His only target of preference appears to be whoever and whomever gets lined up with the barrel of his gun.  At the end of his spree we mop up, rebuild, we bury, and we go on.  What lingers is the desperate need to make sense of tragedy.  That need causes us to look for a culprit, a perpetrator — a motive at least.  And in the absence of anything that makes sense, we ask God why He would allow this to happen.  It's not an unreasonable question to ask; but it does seem unreasonable to expect an answer.

Millions of holier-than-us people have gone to the flames and their graves at the end of indescribably cruel deaths at the hands of other religious folk.  What makes me so different?  What makes my children more worthy of God's notice than those First-century Christians whose blood was spilled in the Roman amphitheaters?  Or those Protestants hanged and burned by zealous Catholics in sixth-century England?  Or those Catholics slain by Protestants?  Should God now suddenly change the rules because we don't like the way He seems to handle things?

And the message from Heaven?  Silence.  Were it not for the pulpits ablaze with the messages of God's disapproval of our behavior, we would have very little information to help us decide how we should judge God's management of the planet.  In my honest opinion, Man has never been equipped between the ears to figure out where God is coming from, or why He allows things to unfold the way He does.  The sketchy record of history always seems to place the interests of God in "MY" court, and woe to anyone who dares to stand against me and mine.  Well, good luck with that.  If God was big enough to let His own Son die on a cross at the end of a barrage of insult and humiliation, why should I insist on better treatment?

Sometimes it seems our prayers are full of information better intended to educate those in the room, while at other times we speak to God as if we honestly believe He has no clue what's going on down here.  Ever heard the expression, "You're preaching to the choir"?  I imagine that if God had a sarcastic streak, we would hear those words many times after we say, "Amen!"  Our prayers are not always full of intelligent requests; but, at the same time, they are not always loaded with unreasonable questions — most of which remain unanswered.  But I feel it would be good for us not to confuse silence with absence.  God hasn't gone anywhere, any more than the mother whose young son has wandered off and is now "lost" in the superstore; the mother has her eye on the child the whole time, but may not choose to come to the rescue at the first whimper.  No, I don't believe God allows the pain in order to teach us a lesson of some kind; it's more like I believe we expect God to "Deliver us from evil" in the sense of "Don't let it come by my door."  Well, if it doesn't come by your door, how do you expect to be delivered from it?  Don't quote me there; I'm still trying to sort this out myself.

The loss of those we love can be a confusing time.  I personally believe that the soul, at death, enters a realm of sleep from which there is no waking but by the voice of Jesus Himself at the Second Coming.  We will all see each other again — but not yet.  So I ask myself, "Why do you get so upset at funerals and memorials?  What's wrong with you?  This isn't the end.  Get a grip."  I guess I have enough hope for the future, but the thought of living without the ones I love is heartbreaking, because I love them.  They are a part of my life, and add a flavor to my walk that is not there without them.  When our loved ones die, they leave a hole in our heart that can be filled by no other.  It is an interesting phenomenon which causes spouses to die within months of each other, no matter their health or their age.

Personally, I believe God is wise beyond anything we have a word for, and as bad as things seem sometimes, I am convinced that things are working out the best way possible.  If there was any other — better, smoother, easier — way that God could bring us through the gates without risking the peace of eternity … That's the way He would do it.

The temptation to launch into a broad theological study right here is compelling, but not this time.  Learning how to live in times of pain and healing appears to be a much more necessary personal study right now, because some other pain — probably a bigger one — is waiting just around the corner;  Better buckle up.


Click on the image below to watch the music video: "Is There Anybody Out There?"

Posted by Tony Harriman at 4:38 PM