Not everyone enjoys rain.  On rainy days some of us just stay inside curled up by the fire with a good book; some take up the battle of tidying some long lost area of the house; Some idle away the hours in front of the TV.  If you don't like the rain, you don't like it.  Hard to change your preferences; no drop-down window in the human program.


But then there are the people who thrive under the magic droplets.  That's where a large part of me belongs. I'm a puddle-splasher; I own hats and waterproof stuff designed to keep the outside out and the warmth in. When I lived in England I never thought of myself as being a rain lover.  And I never thought of anyone else in the country as being fond of the wet … until I moved to the southern USA.

Let me back up a little. As a kid growing up in rain-soaked England, I and the rest of the soccer team dreamed of a day when perpetual sun-shiny days would inexplicably commence, and we could spend our waking hours deciding which beach to go to next.  And there was the fishing to consider.  Of course, fish eat when it's raining, but it was so much more fun tracking them down when the sky was dry.

During the summer months English people do all they can to spend a fortnight somewhere sunny: Blackpool; Southend; Whitley Bay; South Shields; Torquay; Penzance, to name but a few places around the coastline.  It's like the wet batteries have to be charged ahead of the trip through the next fifty weeks.  If this charge doesn't take place, the journey is made that much harder.

There's a flip side to this English coin: When English people move from England to sunnier climes, and live under an almost totally blue sky — doesn't matter where: Mediterranean or Caribbean — our genetic likes and dislikes diet suffers a loss somehow, so that when the low rainy skies do come, it's almost like a friend or loved one has come to visit us.  Eventually though, just like any visit, there's a time for it to be over and we can go back to life as usual.  The rain should leave and the sky should lift and breathing should re-commence.

I'm not sure if anyone really understands how genetics work.  We can definitely see patterns of physical strengths or weaknesses being passed on through each generation; but how about likes and dislikes?  Are preferences learned only from the ancestors above us?  Is the disposition to enjoy city living over country living something that's programmed in at conception rather than learned?  Perhaps.  Perhaps not.  Some other time I suppose we can look at what the experts have to say.

Imagine living in a world that got no rain.  I mean, what's the rain for, anyway?  It just gets everything wet, and of what use is that?  Well, oddly enough, every living thing on the planet needs water in some measure or other.  Water facilitates circulation in the living organism.  Liquid water is what makes planet earth different from all other celestial bodies we can see with our telescopes.  There's lots of water floating around the galaxy, but none of it usable.  If the circulation of water on the planet should stop, everything would die — pretty quickly — just like the creatures living around any of the water holes anywhere in Africa; once the water dries up, the last living creature in the water passes away.

Imagine there being no cause for songs such as:

"I Can See Clearly Now" the rain has gone.

"Walking in the Rain" with the one I love.

"Singing In the Rain."

"Laughter In the Rain."

There are many modern examples, but these are a handful that I like.

Let's make a turn here and explore what might possibly be learned from the rain about the personality and person of God.

Very few people, if any, fully understand the need for God in their lives. Most of us have some kind of idea that God had something to do with our beginning, but we don't really recognize what need there is for God in an ongoing sense.  Bible believers can verse-rehearse how God keeps everything alive.  NEW Testament Christians recognize and sing about the need for Jesus in their lives moment by moment.  I feel like we have a notion of the need, but no real understanding of the details.  Perhaps we can learn something from the rain;  let's try it out:

Let's squeeze down and open out the very big world into a smaller shape that will fit the course of your life from beginning to end.  The first thing you will notice is that the rain is not falling everywhere at the same time.  Perhaps the next thing you would spot is that there appear to be more areas where the rain has accumulated than there are dry areas.  You would see that the rain is always making its way downward, following the path of least resistance until it settles.  You can see that where the water is moving, things are living; where it's not moving, things are stagnant.  Notice that the creatures living in the water are being constantly bathed with new water, and if they were to stop resisting the tendency downward, they would eventually perish in the type of water for which they were unfitted.  You see that the rain is constantly renewing itself through the process of circulation.  Simply put, the water goes up, the rain comes down, up, down — constantly.  The process is beautiful, and takes some pretty sophisticated equipment to duplicate.  Now notice that the rain washes away the crud which has coated the things of our world, carrying it eventually to the sea where it is lost forever.

Now take a moment to re-read the above paragraph, and where you see the words "water" or "rain," replace them with the term "Spirit of God."  I believe you'll see a very bright picture of the process God uses to keep us alive; I'm talking primarily about keeping us alive day by day, but I feel that the eternal process will probably utilize pretty much the same mechanics: living cycles of life-giving Spirit keeping us alive — forever. 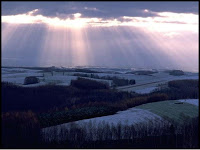 With the new term inserted, explore how different the times are in your life.  There are times when you sense the Spirit of God flooding you; other times you can sense barely a trickle.  There are times when you feel totally covered up with the dirt of this world, and only the refreshing showers from God can cleanse your soul.  There were times when you chose not to move continually upward away from that which would kill you, and you found yourself choking in the saltwater.  It's interesting to me that the water continually pushing you downward is the same water that keeps you clean and alive; not sure what to make of that.  Have to think about it.

There's an expression used throughout the Bible known as the Latter Rain; it's also known as a time of refreshing.  The word "latter" means "last."  I could flood you with a lot of references here, but I'm going to let you look up "Latter Rain" and "Refreshing" for yourself.  In short, it appears that the Bible refers to a moment when the Lord pours out His Spirit for the last time; and this is not a local shower, everyone gets drenched.  Then it seems that our experience goes one of two ways: either we get washed away with the crud in the flood, because we haven't the strength to swim against the tide, or … the crud gets washed off of us because we have strengthened ourselves to continue the struggle upward.  Same Spirit, two different results.  I have no clue how long that Spirit Moment will last, but it probably won't stop until the last lump of crud is washed down to the bottom of the sea.

"But what about …?" I hear someone thinking.  Well, you're going to have to think that through for yourself.  For now, try to enjoy the rain, it's very cleansing.