"The Planet's Too Small"

Here's a think-it-through:  many religions on the planet have a prescribed method for obtaining eternal life, or getting into Heaven / Paradise / Nirvana — whatever.  Doesn't matter where you live on the planet, some plan has been invented that it's said will guarantee a seat on the great celestial train that leads to eternal life.  The trick appears to be … picking the right track — 'cause they can't all be right.

Anyone who's ever had to write a short story or an essay might remember being advised that if you don't know where to begin, start writing about the conclusion — where you want the story to end up — then let the details fill themselves in … for themselves.  If you can envision an end, you can find a path to it; much like those mazes you find in puzzle books.  With that thought in mind, let's explore the task of getting ourselves in the right condition for heaven, and let's start at the end and work toward the beginning.  First we'll decide what behavior might keep you out, then find a way to avoid at the very least those things that are absolute no-nos.

Once you've taken a moment or two to think the above couple of paragraphs through, you'll quickly realize that the "Lost" list is going to be endless, a bottomless pit of "Don'ts."  This list is an accumulating table of infinite data that grows with each passing day.  Avoiding this list will take up every waking moment of your life, since every day new things are invented that should be avoided: Don't gamble at the casino; don't gamble in the newspaper; don't gamble with the lottery; don't gamble online; don't gamble on your phone.  Tomorrow there will be some other form of gambling to not do that doesn't involve you handling money.  Even right now the list is as broad and as deep as you can imagine with regard to what might be the wrong thing to do.

Let's try it this way: suppose we wake up one morning and decide that we would like to be lost; what might we need to do?  No half-heartedness, mind you.  The full gusto — no coming back.

Well, how about starting out small, just to get your feet wet, so to speak.  How about something relatively insignificant:

"This morning I'm feeling just despondent enough that I think I'm going to skip brushing my teeth entirely.  Nah, that won't work; the toothbrush was only invented a handful of years ago.  People been living their entire lives without brushing their teeth even once."

"I live in the city and today I'm going to double park all day; that'll stir some ire."

"No!  I know.  I'm going to start drinking and smoking and taking drugs.  Those are probably some of the most stupid things I could do.  Doing that will surely cost me my soul."

"Thieving!  That's it!  I'll steal something; something irreplaceable. Maybe I'll mug someone; steal their wallet and credit cards and really cause some hassle."

"Suppose I were to take a life?  Surely that's the ultimate stain on the soul?" 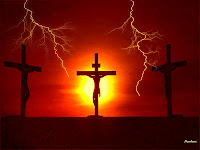 It seems to me that if any of these behaviors are sufficient to cause the loss of our souls, then the sacrifice of Jesus would have been insufficient.  The plan would not have been thought through well enough.  If some wickedness were enough to cause the loss of a soul, then any remedy will always prove to be inadequate; in fact, it wouldn't be a remedy at all; there would be no "Double Cure" from the "Rock of Ages."

Jesus told His disciples that every and all sin that men commit may be forgiven.  What?  All sin?  That's what He said.  That's a lot of bad behavior.

All sin except one, that is.  Jesus did talk about one sin / wickedness / evil that would not — could not — be forgiven: the sin against the Holy Spirit.  Notice how Jesus was merciful enough not to tell us how to achieve that, just in case some lunatic should actually try.

I am still somewhat convinced that a person who is really serious about being lost ought to stop screwing up.  Our bad behavior appears to me to bring nothing but positive attention from God and the angelic realm.  The worse we are, the more effort is put forth for our salvation.  The Plan of Salvation has been set up to bring our souls, black and bruised as they are, back into harmony with God, and every one of us blips squarely on that radar, though some of us are more of a threat to ourselves than are some others — and they may not be the ones you think they are. 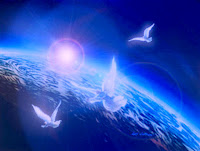 It may seem strange right now, but I have a sense that heaven is astir with one intent only: that of saving lost mankind.  Having children of my own it is easy for me to see, at least a little bit, that our Father has no other desire than to be with His children on the other side of this mess.  "God so loved the world …" remember?  There is no heavenly golf game, no fishing trip, no awards ceremony, no celestial team sport which is more important than the polishing of souls for the Kingdom.

Our speck of a world in the great cosmos is far too little for God to lose something on.  You can't conceal yourself in some great cloud in the sky, or hide behind some bush, Adam.  No speck of matter — seen or unseen — is able to obscure ANYTHING from God.  The Bible speaks of God as having a hand that is not too short to save.  That means He can reach higher than you can climb, and deeper than you can dig.  There is no gutter dirty enough to cause His nose to turn up.  If His hand is not too short, then it's long enough.  And that's all we need to know.

Maybe we should quit trying to pull ourselves up by our own bootstraps.  No, I take that back; do resist your natural inclination to do the wrong thing, but if you keep struggling while you're drowning, you're going to suffocate; and what good will that do you — or anybody else for that matter?  We're all drowning, and God has the only lifeboat that can track and rescue us.  Perhaps what we should be doing more of is calling out in the darkness through prayer, then being still so that a harness may be securely attached to us. 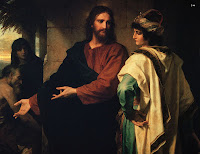 Many years ago a young man ran to where Jesus was and asked, "…What must I do to be saved?"  It's interesting to me that Jesus told this young man exactly what to do; not what not to do; although Jesus did at times tell a handful of people what not to do, rather than what to do.  Here the young man was given the instruction he asked for, although he wasn't pleased about the details.  Now, obviously, God's earthly plan and instruction for each of us is not going to be the same; we all have a very different walk from each other.  Not all of us are required to sell all our goods, or travel to some far away mission field; that would be pointless, since these days the mission field begins right outside our door.  But it would be interesting to see how many of us might be brave enough to ask Jesus the question today, "What must I do that I might inherit eternal life?"  Forget WWJD?  What would Jesus have me to do — right now?

Here's how I personally believe the saving and losing works out: the Holy Spirit is continually flooding us with the power to do the right thing, much like we might be living on the banks of an endlessly flowing bloodstream full of everything nutritious, and the wind is always at our back pushing us toward the stream — all we have to do is go down and reach out to take that which will give us life (there's power in the blood, if you will).  These banks, however, are quite steep, and rocky.  At the top of and beyond the banks is everything that will hurt us.  If we slide down, we'll get what we need, but because of the rocks we'll possibly get hurt on the way.  Because so much effort is being put forth to save us, it takes greater effort to stay where we'll get hurt.  This constant resisting of the Spirit seems to me to be the one thing that will eventually kill us — for now and for eternity. 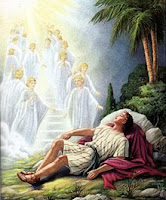 Jacob of old dreamed of a ladder that stretched from heaven to earth, and on this ladder were angels hurrying back and forth, up and down.  Make of that what you will, but I believe it would require a little blindness to think that heaven has no interest in the affairs of man.

If all of this sounds far too simple, I invite you to find a scenario in the Bible that illustrates any indifference on the part of God regarding the salvation of those of us who, without Him, would be totally defenseless against evil.  That just wouldn't appear to me to make any sense at all.