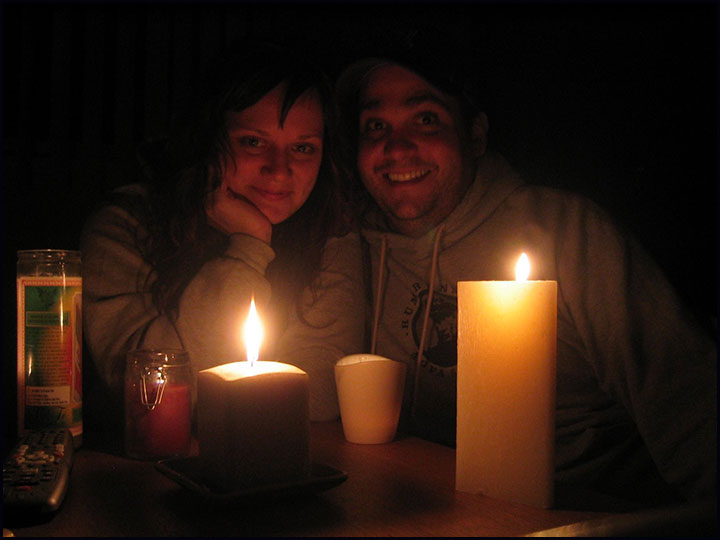 Earlier today the power went out at my place of work.  I was blamed immediately, and was playfully accused of having paid some innocent squirrel to commit suicide by jumping on to the electrical transformer outside our office.  The reason for this playfulness is because it's commonly known among people closest to me that I prefer being outside rather than in, and that I will take any opportunity (power outages included) to breathe real, outdoor air.  So any time the lights flicker even for a moment, eyes are cast my way as a possible cause.

When the power goes off, life as we know it changes.  If it goes out during work hours a mad scramble ensues to make sure computer files are saved, backed up and closed properly so as not to suffer corruption before the backup power gives out.  Since we usually don't know how long the outage will last, we must be sure not to open the fridge unnecessarily.  Doors must stay closed to keep the heat out … or in, depending on the time of year.  Are there candles or a flashlight handy?  Is the phone still working?  You probably have an appropriate list of dos and don'ts at your house or place of work.

The natural world doesn't have this interruption as humans do.  Unless they live in the city, where they are kept awake constantly by the bright lights, the birds awaken and retire by the sunrise and sunset alone; they aren't thrown from their branches by the clanging of an alarm clock, or the jangling music wailing from their cellphones or iPods.  For reasons of safety they learn to rise and be alert when the light comes on, because light is revealing, both of the prey … and the predator. 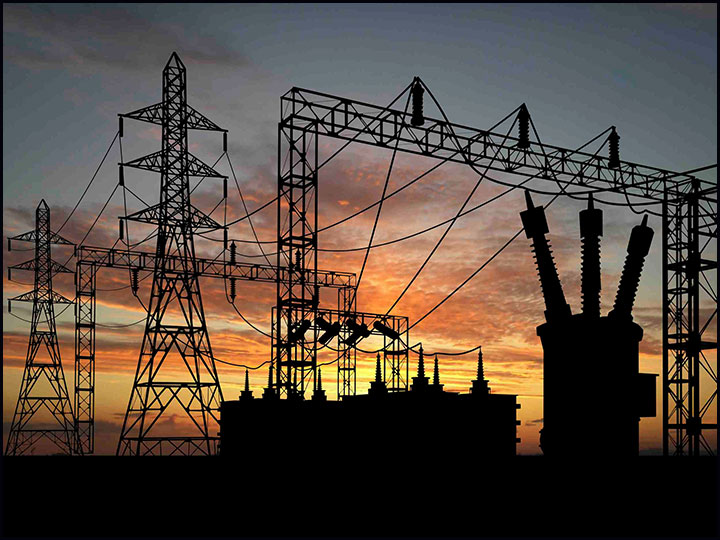 The worldwide power grid is a human invention.  Electricity flows abundantly in the natural world, but not by the use of wires; it is simply carried along by electrons in what is known as a current, much like water in a river or stream.  Once man discovered how electricity worked he set about producing his own, since it was quickly realized that taming the lightning was a futile endeavor, at least as far as could be seen.

The rest of the story is history — an ongoing history.  Electricity goes just about everywhere and fires up myriad forms of appliances in any First World country.  I suppose that ought to be scary on some kind of political level; if one day a maniac got his hand on the control switch, that could be a serious inconvenience.  But that's a story for another time.

I have often likened the worldwide power grid to the universal Spirit of God working in our world — whether we know it or not.  Surely it's the Spirit of God that keeps our hearts beating and the orbs in their orbits.  Would it not be a safe assumption to say that the energy within an atom is kept safely confined by the Spirit of God?  I suppose one day we'll figure out why so much power has to be contained in such a small package — maybe not, have to wait and see.

No matter the names we give to natural phenomena, such as gravity, velocity and electricity, these forces have a Parent, without Whom they would not exist.  I believe it safe to say that the Spirit of God would be happy to burst out from any one of us, just as though released from the walls of an atom.  Unfortunately, though, most of us do a pretty good job of keeping the power safely confined. Just like in the natural world, our brightness or heat is dependent upon our resistance (or lack of), and nothing flows more than we allow. 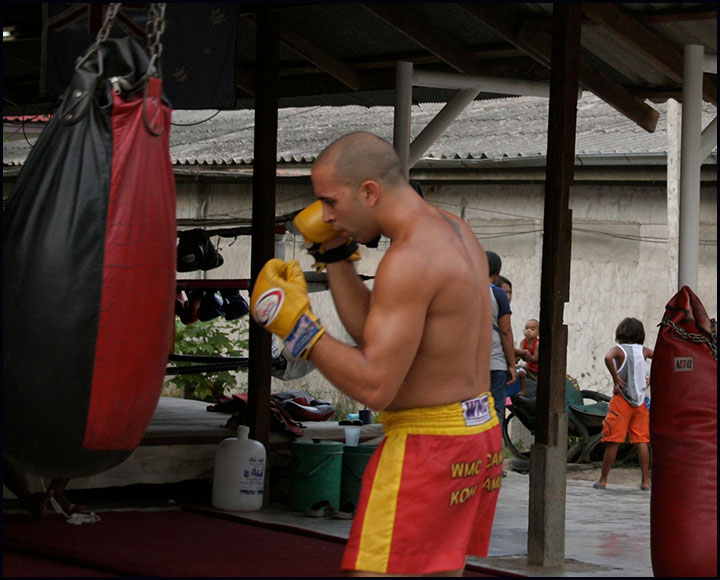 As a young boy I learned to box, and was taught how to "work the bag" — the punching bag.  I always felt the description should have been flipped a bit, because to this day I have never found a physical workout that demanded so much of you and whose object of attention suffered so very little change.  Letting "the bag work you" seemed a much more appropriate description of the event, since the bag always appeared to come off the better.  Nevertheless, working the bag is a work of art, and demands the coordinated use of many parts of the body, most notably the muscles.  Properly approached, the bag will help you develop balance, hand-eye coordination and anticipation.  Most things in life demand patience, so the bag will help you learn how to pace yourself, in the sense of not using yourself up in one grand display of Fourth of July fireworks.  Perhaps most importantly, the bag will help you learn how to keep going, and as you do, you will get stronger.  Your muscles will get stronger; your bones will get stronger; your will becomes stronger.  In short, your body learns and practices economy: your fuel goes farther; as does your breath.  You become physically efficient.  I'm not suggesting you go out and buy a punching bag, just that you gain a spiritual insight from the physical metaphor.

A power plant (where electricity is produced for consumer use) works best when it is working efficiently.  By that we mean that there is no waste of what is being produced.  Every component of the plant may be so finely tuned that nothing is wasted by the plant.  It may be a different story when the power reaches our homes; the appliances at work may not be as efficient as they could or should be, so there is likely more waste than there ought to be.  But, often, we're doing the best we can, so don't bother me about my fifty-year-old refrigerator.

A sterile definition for the word "efficient" is: "Achieving maximum productivity with minimum wasted effort or expense."  And that about sums it up, or least, that about sums up the meaning of the word.  I imagine that human beings and God have two very different ideas about what might and might not be "efficient."  Man's efficiency, to a great degree, is measured by how many figures are on the monthly paycheck.  The efficiency of Heaven declares that "When it dies, it lives;" "When you cast it away, it will return with more than you can count;" "If I be lifted up, many will live."  The thought and theme echoes throughout Scripture.  The idea was continued when one of the early Reformers wrote, "Even our blood is seed; the more of us you kill, the more of us will spring up from our ashes."

I personally believe that there is more power available to us than we will ever need.  The power appears to have no beginning and no end — both in the natural world and in the Spirit realm.  There is no place where God cannot be; and since He is the source of all power, it follows that there is no place where there is no power.  We could really muddy the page here and talk about how time works in all of this, but for now let's keep the paper tidy.

There's a passage in the Bible (Hebrews 6:4-6) that suggests it is impossible to reinstate a person who has been a keen receptacle for the Spirit of God, if they should ever turn away to walk with the Lord no more.  Personally, I can't imagine what insanity would cause a person to turn their back on a being Who is everything we will ever — EVER — need.  But let's walk that trail for a moment or two ….  There was once a being with the title "Lightbearer" whom we call Lucifer.  The record is that this being turned away from God and all the light that infused him, and became what Jesus called the Prince of Darkness.  How would you like to have a title like that?  Darkness doesn't strike me as being a pleasant state to be in.  Very few pretty things live in the darkness of the natural world; what attractive thing could possibly live in the darkness of the spiritual world?  Seems like before we will buy into anything remotely dark, we have to paint it with brightness and sparklies.  But underneath … it's still dark.  But, for whatever reason, this glorious light-bearing being did indeed walk away … never to return.

A sad reality for most of us on the planet is that we remain totally unaware that the power is going out in our lives — I mean the Spirit power, the one that is keeping us alive more so than the next bag of potato chips.  Sitting at home we can see when the lights go out, or when the TV goes off.  But when the Spirit leaves us — even in a small measure — we appear to have not a clue nor a care.

I imagine a clear Spiritual barometer (for want of a better expression) might be the one that indicates how much we are willing to give for others; and I mean "intelligent" giving, more than just handing over a tithe check at the end of the month.  If the barometer is showing "High," I imagine the life in question will be a reflection of how you might picture the earthly life of Jesus to have been.  I'm not talking about you walking around like you're the embodiment of God, but I do feel like your interests will reflect a much higher economy than that of the earthly banking system.  I imagine you might wish to better fill your mind with the Word of God, rather than with the sports statistics of the year.  I feel we might be more inclined to study the Scriptures looking for instruction, rather than for the purpose of proving how right we are.

I heard someone once say that a clear indication of your spiritual condition may be found in how interested you are in the lost souls of those around us.  It wasn't worded quite that way, but I definitely got the point.  If my study of the Scriptures does nothing more than keep me hunkered down over my Bible and concordance, then I think, in the economy of heaven … my time will have been wasted.

All of that sounds so very judgmental, and may not reflect your experience at all.  But then, it wasn't written for you; it was written for me and my reflection.  After all, my observation of the natural world is inclined, I believe, for my own admonition first; if you get something worthwhile out of it, then I say, "Praise the Lord!"

Posted by Tony Harriman at 10:11 AM No comments: