"Where On Earth Is Heaven?" 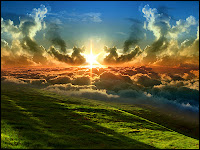 Very little is said in the Bible about the "Place" called Heaven (where we believe God lives); or exactly what the people do who are there.  Seriously, check it out.  We read that we have a “Father in Heaven" and that there are “Angels of Heaven,” but we are told next to nothing about what the "Place" is like.

The Bible writers appear always to refer to heaven and God as being “up there,” or “out there.”  Whatever “the place” is seems to be different from “the Kingdom.”  Jesus spoke of “Our Father in Heaven Who hears us,” but of the Kingdom of God as being “within you / among you / in your midst.” (Luke 17:21).

I suppose we could pull the concept down to earth and try to understand it this way: people living in the Falkland Islands in the South Atlantic are “subjects” of the Kingdom of Great Britain, but Great Britain is “over there” — way over there.  Yet Falkland Islanders are still subject to the laws of the Mother Country; they enjoy benefits and suffer penalties provided and imposed by the Mother Country.  Just because they are far from British soil makes them no less the children of the Kingdom.  In like manner, wherever may be “the” House of God is immaterial, perhaps in every sense of the word.

So we can “dwell” under the umbrella of the Kingdom, but we still have no clue what the “place” looks like; just like many British subjects living in India or the Caribbean may have had no clue what London looked like.

Our Christian brothers and sisters who believe that a person goes right to heaven when he or she dies, describe the place to which they are headed using terminology borrowed from the description of the New Earth described in Revelation 21 & 22 —Tree of Life; New Jerusalem; No more tears, death or pain; a River of Life; Fruit; Leaves; Inhabitants possessing Eternal Life.  But this is New-Earthly, not Now-Heavenly.

Even the people who believe we become angels when we die, get the idea from Jesus' reference to how we shall be like the angels in "The Resurrection," neither marrying nor giving in marriage.  But the resurrection won't happen until the Second Coming — Right?  It seems that only a handful of people have been resurrected and taken away so far — Moses first, then the people whom Jesus took with Him as He ascended to Heaven.  The rest of us must sleep in the dust till we are called forth at the Second Coming of Christ. 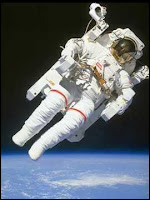 Think about it; flesh and blood won't inherit the Kingdom.  I suppose we could spiritualize that thought away, and we wouldn't be wrong — I just don't believe we would have a complete concept of what happens to flesh and blood when it leaves the confines of Earth's gravitational and air-pressure forces.  So if we travel through space soon after the Second Coming and make our way to the "Place" called Heaven, what possible use would we have for this bizarre (albeit wonderful) house of flesh and bone?  Yes, God can do anything (anyone who knows me will know that I believe that to be true), so He could, for some strange reason, preserve our wasting-away flesh.  But just because He can, doesn't mean He will.  Right?  Maybe because He doesn’t need to.  Maybe we’re going to take on a whole new manner of being.

God comes from "Somewhere," and takes us to "Somewhere."  But where?  Have you ever wondered what the floors are made of in Heaven?  Does Heaven even have floors?  What about the walls?  Is there a record of food (as we know it) growing in Heaven?  At the end of all things there's going to be an initial Feast where it appears that Jesus Himself will be the Host.  But what do we suppose might be served?  Can you think of an item that might be on that table?  I can think of a couple of things.  Here’s one: do you remember at the Last Supper, at that Last Passover, Jesus said He wouldn't drink of the fruit of the vine until He drinks it new with us in His Father's Kingdom (Matt. 26:29).  Fruit of the vine; that's fruit juice.

And the answer of course is, "If it doesn't matter to you, then don't sweat over it."  No one of us is going to know for sure regarding a lot of things we now assume for granted; at least not until we set “foot” on wherever we will be parked for a thousand years while the earth rests.

But if you're like me, and enjoy a little food for thought, then paste the above concept into your thinking as you peruse your version of the Scriptures. 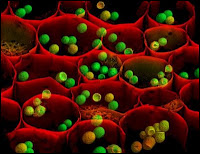 And while we consider what God might be like and where He lives, we should consider this: If it were possible for me to go straight out from the earth in ANY direction, and assume that I didn’t bump into something on my journey, I would find that I could travel straight out FOREVER, without ever being able to say, “There, I’ve seen it all.”  The Great Out There is so great that we have no tool for measurement.  From an earthly human perspective we are so small, we don’t even register as insignificant.  And while we are thinking of the Very Big, let’s not forget the Very Small.  Whatever instruments God uses to fashion the things we continue to discover under the microscope, they are infinitely smaller than anything a man can imagine.

I have listened to more than one conversation where God has been confined to the realm of Quantum Physics.  “This is where God lives and how He operates,” the conversation asserts.  Well, my thought on that is that if we can dream it up or discover it, this is probably NOT where God calls home.  How shall we confine a Being Whose arms stretch across eternity?  Eternity in EVERY direction.  I mean, good grief!  We’ve had electricity barely under control for what — two hundred years?  We’ve been aware of the immense world under the microscope for less than half of that.

Had Jesus spoken of “Germ Theory” to His disciples, I imagine there would have been no New Testament writers — at all.  Jesus likely would have been considered more of a crackpot than He was already accused of being.  Is it no wonder He leaned so heavily on the known things of earth to try to describe the unknown things of heaven?  At least, known and unknown to us.

So where on earth is Heaven?  Heaven only knows.  And I would venture to guess that so little is spoken of regarding the “place” called Heaven because we don’t have the brain power necessary to process the concept.  Once the final veil is drawn back, I suspect reality will reveal that Heaven has been here all along.  Rather than being “out there,” the likelihood is that Heaven will turn out to be more of an existence, attitude and awareness than just a place of bricks and mortar.

And that's just my take on it …