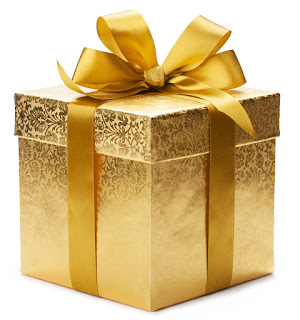 You can't earn a gift. You receive a gift whether you deserve it or not. It's also not like the lottery, where you invest a little amount in hope of receiving a much larger payout.

A gift requires no merit, no qualifications, no social standing. It does require one thing, though ... being in the right place at the right time. And, of course, you have to be known by the giftgiver.

Being blood related to the giftgiver can also be helpful. Not to mention being known by, or related to, someone who actually has the capacity to give a gift in the first place.

With a little effort and good fortune we can usually acquire earthly gifts for ourselves.  We might receive as a gift a pair of socks or some kind of tool or gadget. But, given time, we could probably have worked out these acquisitions for ourselves.

The miracle of life might seem, on the surface, to be the result of conditions or consequences. But fruit from the ground is much more than just the result of planting seed. Granted, conditions proved to be conducive to life, but the conditions weren't the cause -- they were the vehicle. Life — all life — is a gift from God ... the Lifegiver. The gift is given where it did not exist before it was bestowed. That's what makes it a gift.

Life doesn't earn life in order to exist. Life doesn't buy its way into being. Life doesn't learn how to be alive. Life is given the gift of life by the Lifegiver. Granted, learning how to stay alive can be a useful pastime, but simple survival can take many forms.

There are specific gifts that Heaven hands out to humans from time to time that, also, are not earned. The gifts of the Spirit (or gifts of God ... same thing) — gifts of wisdom, healing and faith, for instance. The gift of tongues (foreign languages ... a gift the lack for which I have sadly suffered the need) is more than attending a class to learn a language. The gift of tongues is a given reality which a moment before did not exist. People learn languages all the time (children more easily), usually by exposure to a language.  Learning — or earning — a language is different from being gifted, or given, a language.

The opposite of life is not simply death. Death is an acquired condition, acquired only by living things. We don't say that because the rock is not alive, it is, in fact, dead. The rock has never been alive (as we know life). For the rock to "experience" death it would have to have been alive in the first place.

The wages (not gift) of sin is death. The gift (not reward) of God is eternal life. These two things contradict each other. One cannot be earned, and one cannot be bestowed, but both may be acquired. And both are directly opposite to each other. Death doesn't seem to me to be a decent paycheck, though the payment lasts forever ... the payment that keeps on taking.

The Bible speaks of mankind as having two births, one birth from the material of the earth, and another birth from the material of Heaven — the Spirit. This would seem to contradict the notion of reincarnation, where the spirit supposedly keeps on going from birth to birth. It also gives grief to the notion that a child may be lost or saved (depending on the parents) even before birth. Everyone brought into the world is given a shell into which may be poured the Spirit, but this pouring (at least for most of us) doesn't take place until later on when we've lived a little.

Let's talk about that eternal life.

Everything physical about us is going to perish ... eventually. That's what physical things do — they wear out. But not so with the Spirit. It's the Spirit that gives substance to the physical things of the world. The Spirit makes things work. The Spirit gives — eternally — so that everything that has any kind of being can keep on existing. Atoms, molecules, planets, suns and galaxies keep on spinning because the Spirit makes it happen. If the Spirit stops giving life (or perpetuation), living things will die.

Right now we live in the part of this grand equation where everything appears to be broken. Nothing works right anymore ... except decay — the compost is still very active. But everything else? Not so much. No one gets along with anyone else hardly. The planet's breaking down; society is breaking down; morals are broken down, and those who would say they live morally will cut your head off for disagreeing. What a mess.

Let me sow a seed with you — a living seed. If you don't want the seed, then stop reading right here, 'cause this seed is alive and won't stop growing:

This life we're living right now is so very, very temporary. In fact, it's so brief, we might ask, "Why bother with this bit?" I have no idea how to answer that, so I don't spend a whole lot of time thinking about it. What I do think about is doing all I can to get to know the Lifegiver, you know, the one who made it all in the first place and keeps it all going. He's the One who lives outside of the church six days of seven. To live in the presence and favor of the Lifegiver is to live forever. The natural condition of living the life of the Lifegiver is exactly what you might imagine: life. Right now we don't enjoy the bliss of eternal life; you can know that by the pain you feel in your heart, your head ... and your joints. If you're young enough to not understand pain yet, just wait a while, pain will arrive in good time.  God, the Lifegiver, lives forever, and He wants to live forever in you.  God will do everything He can to give you the opportunity to live forever.

If you're resisting God — stop!  If you have a notion that you don't want to live forever — stop that too!  The Kingdom of Heaven should not be compared to anything in this world or any of the people in it.  The Kingdom of Heaven and the place of Heaven is far better than anything we have ever experienced.  Let that seed be in you, and let it grow, for good things will come of it.

As a final sowing-of-seed moment I invite you to look around at the tapestry of the natural world. In the realm of nature may be seen the fingerprints of its Creator. There you may learn of the Lifegiver, at least a little bit. And when at last He returns to hit the reset button on the planet, He will not seem to you to be a stranger. The Giftgiver knows you well, and if you give Him a chance He will prove it to you. You'll know when He does, I promise. Live well, my friend.