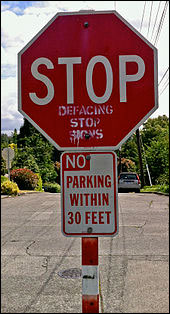 Life sometimes has more irony than we can deal with, or for which we have a word.

Right now a couple of guys sub-contracted by Sears are installing a dishwasher in our kitchen.  This will be the third dishwasher we've enjoyed from Sears; one we had for fifteen years, the other for two weeks.  The second one died after four days on the job and is being replaced by this third machine.

Because we had such a trouble-free experience with the first Kenmore (Sears brand) dishwasher, we felt it would be a safe bet to replace the old Kenmore with a new one.  The ironic part of this short story is, of course, that the new machine didn't even reach its first birthday.  We'll see how the replacement fares.

Some of the irony of life can be found in brief witticisms, such as: "The more birthdays you have, the longer you live," or "It's only my craziness that keeps me sane."

Some of life's irony can take a very dark turn, such as: "We go to war so that we can live in peace."  That statement is one of the saddest testimonies the human family has to offer.  Estimates (from the people who study such things) are that more money is spent on producing materials that kill than is spent on helping keep people alive.  The money spent on just the technology used to keep tabs on our international enemies could feed the entire globe for a year, with twelve baskets left over.

It's ironic that religion, which is supposed to draw us all closer to God, serves more often only to separate us from each other — THAT just doesn't add up for me.

Irony scuppers an "unsinkable" Titanic on its maiden voyage, before any real rust has a chance to set in, and before the rats are given any opportunity to set up home.  Some of the crockery and silverware had never been used.  Now, THAT is surely the epitome of irony.

There is a strange Biblical principle that gets a mention in the Book of Proverbs; in the old King James Version it reads like this: "There is that scattereth, and yet increaseth; and there is that withholdeth more than is meet, yet tendeth to poverty." (Proverbs 11:24).  The idea that plays out is so expected on an everyday scale that we don't view it as irony.  We take a single potato, cut it up and bury it; what happens is so regular, yet so unreasonable.  That single potato brings forth other plants which themselves bear many more potatoes.  An ear of corn has the potential for producing hundreds more ears just like itself.  All that's required with these and countless other examples is that we be willing to scatter what the plants give us so that they may be allowed to increase.  But notice that there is a flip side to the principle; If we keep back everything that the plants produce, and don't take the risk of casting some seed back into the soil, we end up with nothing, even though it looked like we were being so judicious with our economy.

Picture these statements, and read them with a view to irony:

• We are committed to setting the inmates free.

• Your determination to keep the Concentration Camps open is distracting.

• The day after winning the multi-million dollar lottery, the winner, as he crossed the road to the bank, was accidentally struck and killed by a vehicle owned by an employee of the lottery organization.

• In an attempt to better his health, Mr. Smith adopted a vegetarian diet, only to discover, too late, that he was allergic to nuts, soy and wheat.  Smith choked to death as his throat constricted after eating a lunch which included peanut butter on wheat toast and a glass of soy milk.

If Murphy had a cousin, surely his name would be Irony.  Murphy's Law says if it CAN go wrong it WILL go wrong; Irony makes it go wrong in the WORST possible way.  There's an expression which says if something has a 50-50 chance of going wrong, 90 percent of the time it will.  Think about that the next time you go to plug the charger into your mobile phone; most connectors fit only one of two ways, but notice how often you get it wrong.

I'm not sure if we could call it irony that the red blood of Jesus will make the wrongdoer's sins as white as snow, but it's certainly right up there with paradoxes, wouldn't you say?  The paradox of death giving life is, in my opinion, a theme that will get much attention from glorified human beings on the other side of the veil, especially when you consider the unworthiness of the subjects.

Some paradoxes are man-made, such as our description of light; we call it a particle and a wave.  How can it be both; surely that's a contradiction?  Well, light is what it is.  If our description of it is paradoxical, then so be it.  A better use of the word "paradox" might be as a description for a jumbo shrimp.  You do the math.

Some paradoxes are better known than others, such as: "Sometimes you have to be cruel to be kind," or "This is the beginning of the end," and "You must speculate if you wish to accumulate." 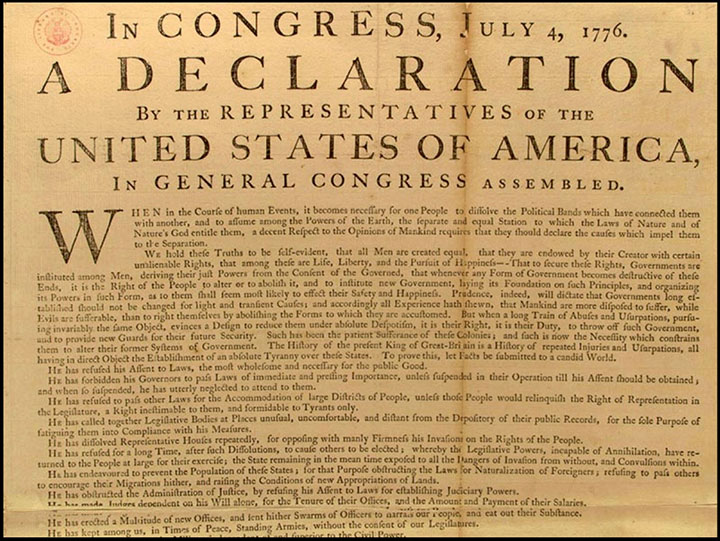 As a spectator of American opinions I have watched with interest the continual defense of the American Constitution and the Bill of Rights.  With equal interest I have listened to recordings of speeches by Martin Luther King Jr., and his discourses regarding inequality in America which came to a head in the 1960s. His argument for equality was based on one of the founding pillars of the United States of America, which asserts that all men are created equal — not alike … but equal.  Of course, once a reasonable person allows the mind to grasp the logic, it's just a matter of time before things change in society.  And that's exactly what has happened.  America, in my opinion, has a long way to go, but at least the tracks are tending in the right direction.

Let's take the reasoning a little further.  Suppose we COULD make just a tiny tweak to the Foundation of the Constitution.  Would we not agree that all men AND WOMEN are created of equal value?  Could we not agree that the Declaration of Independence was framed by men during a time when patriarchal tendencies reigned and the term "he" referred to everybody — man, woman, son and daughter?  Would we not agree that attitudes and expectations have changed since the mid-eighteenth century, and that often the sole breadwinner for the home is the mother?  The reality is that the mother is often the only parent anywhere in the picture.

I suppose you could say it's ironic that the change that SHOULD be made to the Constitution is the change that CANNOT be made, because to change one single thought in the Pillars is to leave the rest open to further interpretation.  I imagine we would be surprised at how strong that thought-process is in the considerations of church doctrine — ANY church doctrine.  Consider how fragile must be the rope holding up the idea that all the Commandments were nailed to the cross of Jesus.  ALL the Commandments?  Well … maybe not all … maybe just that one.  Which one?  The one that forbids stealing?  The one that denies us the right to infidelity?  No, just the one that God said to remember — the fourth one, relating to the seventh-day Sabbath rest, forget about that one.  What kind of reasoning is that?  It's the kind of reasoning that causes trouble to the human family the world over, double standards that make one thing right for you and another right for me.  What's good for the goose is not necessarily good for the gander in society the world over. 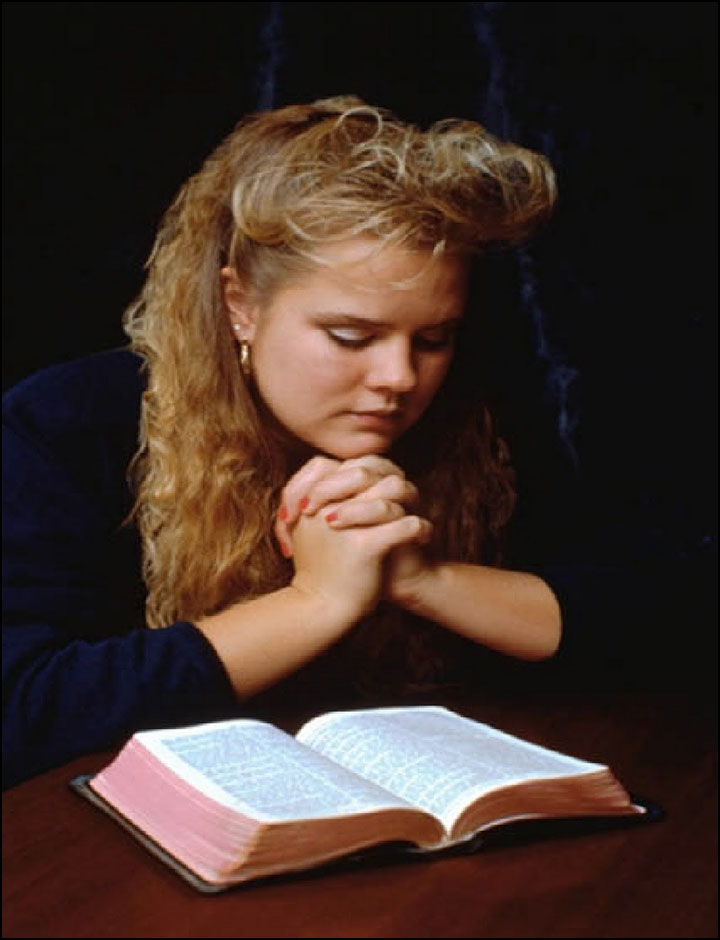 Part of the human problem lies with our tendency to get comfortable, to settle in to what anchors we want to use for our lives.  In my short Christian walk on the planet I have spent time around people who hold differing opinions on what it means to serve and worship God.  Something that jumps right off the page for me is how we each have a relatively small handful of Bible verses that we find meaningful and which control the rudder of our spiritual boat.  If you spend enough time listening to people, you quickly realize that the Bible for most of us is a very small Book with only a few ideas that are worded in many different ways.  The fact that we find ourselves rehearsing the same verses over and over seems to me to be a testimony to how unable we are to grow larger than our fishbowl will allow.  In order to make a change in our spiritual thinking, we need to have a reason to change, and most of us have little time to fathom what we already know and believe, since a lot of our time is spent repeating and rehearsing familiar verses in the hope of better understanding those few verses — now THAT's ironic.

So where to from here?  What chance have we for growth?  What TIME have we for growth?  I'm talking about spiritual growth … emotional growth … growth that helps me realize that I am indeed my brother's keeper, if circumstances should so arrange themselves.  The technological world springs forward with leaps and bounds, offering human beings new toys every year; new gadgets to fill our Christmas stockings; yet another contraption to keep the kids entertained.  The trouble is, we're so busy learning our way around the constantly-updating electrical wizardry, that we really don't have time to think about anything important.  Our homes are so full of labor-saving devices which eventually need repair and replacement, that we spend more time working to keep them … than enjoying them.

It is a strange irony that the papers often carry stories of people who escape disaster by a hair's breadth.  You know the stories: the 18-wheeler truck that plows across the freeway into oncoming traffic and misses my car by inches; the brickwork falling off an old building lands on the ground a few feet in front of me.  The plane I should have been on left without me while I tried to find a place to park, then went on to crash, leaving no survivors.  The ironic part of the story is that many of the people who survive … never start to live until they are brought to the brink of death.  That is often the ironic truth of the matter.  The time for living is now … while we have a chance, not when we have nothing left but lamentation.