"A Planet Out of Control"

Does the weather have to be so violent at times?  If the created world is teaching us something about God, what on earth lesson should we take from the destructiveness of nature?  If God never changes, how shall we relate to the moodiness of the weather.  If all this breaking and tearing should follow us through eternity, how much peace do we think we would enjoy wondering what was going to get beaten up next?

I suppose we should kick this thought off with the observation that God has created everything that exists — everything we have a sense to perceive — and that the math governing these things obeys His will unerringly.  The forces keeping the atom and all its parts together are the same forces keeping the suns and planets and moons in their respective courses.

Often I am inclined to read the book of nature and enjoy the handiwork of God, but throw away those aspects that don't appear to reflect in the slightest anything at all about the goodness and love of God.  After all, is there honestly a place in our minds where we can see God being invigorated by the pace of the chase as the cute and cuddly bunny gets overcome by the fox?  Or where the little fish are taken out by the bigger fish?  You know what I mean.  We can easily envision God painting the petals of the rose or designing the shapes of the crystals in the snowflake, even deciding the order for the colors in the rainbow.  But how about giving instructions to the killer whale regarding playing with his food as he chases down the baby seal?  We giggle at the gurgling baby, but cringe at the wasting away of the elderly.  I wonder how correct it is for me to separate these observations.  In other words, if it doesn't fit my picture of God, well, I should just toss it out?  That does seem convenient, but how correct would it be? 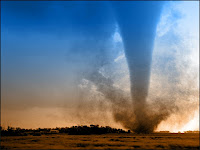 The changing faces of the weather appear to me to be the result of conditions in a world out of control. Everything on the planet without a mind does not appear to go askew in its behavior all by itself.  Hmmm, how correct is that?  I mean, the weather doesn't have a mind, but it often goes crazy.  Maybe it's a little different, though, because what we think of as the weather is really just a lot of mindless water drops and dust being thrown around by crazy "conditions;" a bit like me picking up a nice flat rock and skipping it across the lake giving no mind to the fish basking in the sun near the surface.  You get the picture.

Around our home we have two dogs that we love and care for, one is a definite homebody always there when we come home, wagging his tail as he greets us, always right beside us if thunder should roll in the distance.  The other dog is a textbook gallivanter who is often absent upon our return, couldn't care less about the weather, and often comes home with much of the trash left out by the neighbors.  Occasionally she'll return with a nearly-new work boot, which was probably left outside the back door of who knows who, and from time to time she'll drag home the remains of some animal that was killed by a passing car half a week ago.  It's easy to see the hand of God at work in the heart of the first dog; but the second one?  Not so much.  I mean, there's no way she or anydoggy else is going to behave like this kind of thief in the perfect earth made new — right?

But back to the weather.  Since the weather appears to be a result of conditions rather than commands, perhaps we could step off the literal and explore some parallels.  Let's imagine for a moment that bad weather represents rough and tough times in our lives, periods of time over which we have little or no control.  Water or wind invade our space and sweep away the things we hold precious; all that remains are ourselves and a brick or two.  Our response to this set of events is revealing; some of us will thank god that we have survived and recognize that "stuff" really has little value, while others of us will turn and curse God for allowing this calamity to befall us.  Often these two classes will have shared the same pew during quieter times and will have grown up eating the same biblical food.

Don't we see the same picture being painted in the forest?  A bad storm rolls in during the night and causes havoc outside our windows.  The patio furniture is scattered to the four winds.  The corn and tomato plants are totally devastated.  The dawn breaks and we look at where there once was a forest; a violent tornado has come through and leveled just about every tree that stood.  Wait a second, "Just about every tree…?"  You mean there are a handful of trees that didn't get flattened?  Yes, just a handful.  The difference was made by how much of a root system each tree enjoyed, and sometimes by how much foliage was (and was not) flapping in the wind.  The kind of tree that survives "appears" to be random, since many of those that didn't survive were of the same kind as those that did.  Above ground level all may have looked equal, but once the conditions were adjusted it became clear which trees had been rooted and grounded securely.  These survivors likely lost a limb or two and probably more than just a little foliage.  For the rest of their lives they'll bear the scars that will tell the story of their ordeal, but at least they are alive.

In the Bible record and prediction it appears that a social storm is approaching the horizon of time, a storm of civil unrest and governmental control.  The only people affected by this storm are those who will dare to stand tall in its way.  They are affected, but they are not taken down.

So should we complain about the storms?  You could, but it won't make any difference.  The weather is as the weather does; all the while we are in this unstable world we are going to suffer instability.   Does the weather tell us anything about God?  Maybe.  Or maybe it tells us rather that He has to tolerate brokenness and upheaval right along with us.  When Jesus was here He didn't walk around in a bubble; He got baked and frozen along with the rest of His people.

Although … there was that one time on the lake when the disciples woke Jesus during what was perhaps the worst storm they had ever endured; and that's saying something for fishermen.  The story falls so glibly from our tongues that we often fail to put ourselves in the disciples' shoes.  In terror they woke Jesus; they were convinced they were going to die.  Jesus stirs and calmly speaks to whatever was causing the storm, and just like on a Hollywood set, an eerie quiet descends upon the scene.  All that is heard is the gentle lapping of the water against the hull of the boat, and probably the disciples' heavy breathing.  "What manner of Man is this?" they ask each other.  Indeed, how shall we describe Him?

Well, let's park this here and close on the thought that though the storm may be furious, and indeed our hearts may fail us, yet God is not intimidated by the noise and kerfuffle of the weather.  And in the end, nothing of value will have been lost — not really.  We may lose a limb — we may lose our lives; but God is well able to restore.