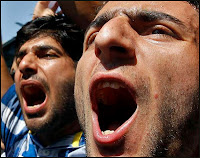 Imagine for a moment that God were to step out from behind the veil and ask you to do something for Him.  What do you think Someone like God would need help with?  Perhaps He's tired of the misuse of His Name, and He'd like you to march on Hollywood.  Maybe He'd like you to write a check and support one of the groups battling for the preservation of the planet.  He might ask you to help a student missionary through the summer.  Maybe a simple healing of some incurable disease.  I expect you can imagine all kinds of things that God might like you to do; And I don't suppose any of them would be wrong.


Lately the news has been full of reports about religious folk around the world once again getting bent out of shape because some aspect of their religion has been ridiculed.  I appreciate the zeal, but I honestly think all that energy might better be used somewhere else.  Of all the things I feel God would like me to do, I have never imagined He would need me to set fires at the homes and offices of those who make fun of Him — ever.  Seriously, shall I worship a god that needs me to protect him?  What kind of a god is that?  Isn't that story the same as was played out during the Dark Ages?  During those days it was considered an act worthy of death just to believe something other than what was advocated by the established religion.  Many a righteous soul went to the gallows and the fire — not because of — but in the supposed name of piety.

Christianity appears to me to be very different from most religions on the planet.  Can you think of a time when Jesus told His disciples to kill those that took Him for a fool, or didn't do what He asked?  Think hard, now.  There's no record, is there?  In fact His counsel to them was quite the opposite.  If they were to land in a place where the Good News of the Kingdom was not accepted, they were to leave.  Leave.  No yelling and screaming.  No cursing the fig trees on the way out.  No calling down fire from Heaven.  Just leave.  Do you remember the young man who, as a result of religious zeal, lost an ear at Gethsemane?  It was restored by Jesus Himself — tout de suite, I might add.

You listen to the TV and radio and you say, "It makes me mad when they speak about God like this!"  Yes, but you be careful what you do with that indignation, or before you know it, it'll be you splashed all over the news after you've blown up the local pool hall, or some similar establishment.  God doesn't need you to wipe His bloody nose.  On the contrary, it's you who needs Him to wipe the dirt out of your eye so that you can see more clearly and make a proper judgment. 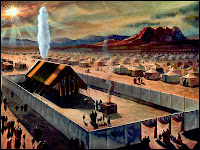 Step back in time and in your mind's eye try to see that day when God asked the Children of Israel to gather gold and jewels and cloths for the building of the wilderness Sanctuary.  The people responded immediately, and kept up the giving until eventually another call went out: "Stop giving; we have enough."  Can you picture it?  God sends out a broadcast: "That's enough!  I don't need any more from you."  Have you ever heard a televangelist preaching that message?

How many of us do you imagine have ever prayed the prayer that goes something like, "Thank you, Lord; that's enough blessings for now.  We've had all the days of ease and abundance we want.  Now it's time for some seriously hard work."?  Sounds unlikely, doesn't it?  At least it does on this dark side of eternity.

It's interesting to me that most things worthwhile are achieved as a result of hard work and maintenance.  Very few of us have complained that the corn, without any help from us, is producing too well, or that the tomatoes, all by themselves, are just busting through the cages.  Food and flowers need care and attention; they have to be fed properly; watered regularly.  Weeds, on the other hand, seem to require no special attention whatsoever; though it does seem, by way of observation, that weeds don't like darkness.

Recently I began a crusade to reclaim an area of ground around our house which had been covered up with what I am sure were well-meaning weeds and nasty grasses.  All the while I was pushing, pulling, hacking and whacking I was soothing my soul with the notion that all this hard work is good for me (actually, I don't mind a little hard work — it keeps me in shape, and the blood pressure down).  There's probably more truth to that notion than we understand.  As we get older, we do tend to pack on an extra pound or two, and those extra pounds are best kept under control.  Going outside and getting our hands dirty appears to be, for now, a heaven-ordained activity; do you remember the Genesis passage that illustrates man having to work his tail off getting the ground to produce?

In the early Seventies a song was written entitled "Vincent;" it carries a line that reads, "Weathered faces lined in pain are soothed beneath the artist's loving hand."  Maybe it's just me, but I envision such a lyric being inspired by a much bigger Writer — our Heavenly Father.  Our weathered spirits are soothed perhaps more than we know.  Though I hate the thought, the pain that gets through the barrier appears to be just enough to keep us human — for now.  Like the ground-level counsel that reads something like, "Everyone should live in New York, but leave before you get too hard."  This earth is a painful place to live; but doesn't it seem sometimes that the hurt is what keeps most of us looking up?  Pain is no respecter of persons, and we have no place else to go; we can't just pack up and leave the planet.  I believe that even those of us who refuse to look up are also soothed by the Artist's loving hand — regardless of culture, color, tongue, or creed.  You do know that it was God's idea to have lots of different languages on the planet, right?  Yes, I know why.  But don't miss the point about Who worked it out. 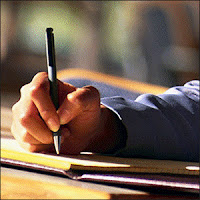 In a sense, a journalist is an artist.  By careful crafting of words, a journalist can paint a picture that either colors over the facts, or painfully tells it just like it is.  A journalist can fill your heart with warm fuzzies … or with horror.  Until the concentration camps opened at the end of the reign of the Nazi regime, the German people had no true idea about what went on behind those walls and fences; they had been fed a glossy story that was nothing but (trying to think of a good word here) a foul-smelling fabrication.  Today the details still make us sick.  The artistry of a journalist's report can bring down an entire nation.  With that thought in mind, I thank God for YouTube; I might not like or agree with everything that's dished out, but a moving picture record of a stoning in some Middle Eastern town center paints more than a million words for me.

I imagine it must be much easier for an evangelist to have his or her face on TV asking for more money, than it would be to stand preaching on some street corner in, say, Iran or Afghanistan.  Isn't it interesting that very few people appear to be called to minister where it's dangerous to do so?  There are places where a Christian will still lose his or her life simply for trying to help lift minds out of the Dark Ages.  You might never get that call, but I imagine you probably know someone who will.

Picture it: one day there is a knock on your front door, and outside stands the Lord Himself.  He asks to come in.  Once you've gathered your senses, you feel embarrassed, because you haven't had a chance to put away all the stupid stuff with which you fill your time when you're not in church.  With a knowing look on His face He tells you not to concern yourself.  He invites you instead to come outside.  You walk together quietly, then He tells you, "I have something I'd like you to do for me."  Do you have any clue what that job could be?

You might actually be surprised at how well His request would fit your personality.  Though the task might not be quite as exalted as you think you deserve.

Posted by Tony Harriman at 1:45 PM