"What Was the Lightbearer For?" 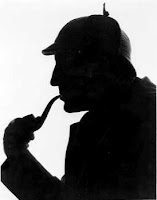 Trying to figure out what life is going to be like on the other side of the veil is really tricky, since we only have our side of the story to go by; we know nothing about how things used to operate before the Great Fall in Heaven.  Trying to sort things out in our minds with what little information we have is much the same as it would be to have only the last chapter of any one of Arthur Conan Doyle's books about Sherlock Holmes; all we would have is the conclusion — none of the plot and maybe not even half of the characters.  There would be none of the finer details that answer the questions that simmer in the logical pots of our brain.

What follows here is really just a lot of thinking aloud.  I do that when I'm trying to sort out one of those mental puzzles that trouble us.  If you are one of those people who has all the answers you need to make your boat float, then here would be a good place to exit the browser.  For the rest of us, here goes:

If, before the fall, we had a much closer relationship with God than we have now, why would there be a need for a Lightbearer?  You'll remember that "Lightbearer" was the title Lucifer bore before his fall; after the fall his name was changed to Satan, meaning Adversary.  But in a perfect heaven, assuming there was open communication between everybody, what might the job description be for the "Lightbearer"?  let's explore:

In the most basic sense, when we think of a lightbearer, we think of someone who goes on ahead of the rest of the pack with some kind of illumination in the darkness.  We might also think in intellectual terms, where an educated teacher is appointed to train the youngsters regarding a topic about which the children have little or no information.

In the beginning when God said, "Let there be light …," to what or to whom do we imagine that command being given?  Are we to consider the possibility that light did not exist … at all … before that moment?  It definitely seems clear that light did not exist where God said it should, otherwise He wouldn't have given the command.  But because this light in the beginning seems to be different from that given by the sun, since the sun and moon didn't appear until the fourth day of Creation, we have to consider the possibility that this initial light was temporary.  And is there the possibility that Lucifer, being the Lightbearer, was the one that brought that light … in the beginning?  What kind of light would it have been?  Not intellectual, since there wasn't a thinking man until the sixth day.  It seems clear in those first verses of Genesis that there was an evening and a morning … per day, in this order: dark, light, dark, light, dark, light, dark for the first few days until the fourth day. 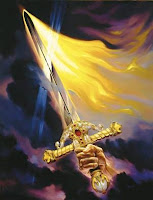 It gets muddy, because, in those first verses, there is no mention of anyone but God being here.  Anyone else being around later in the week is a topic for another discussion.  Adam and Eve are the second and third "people" characters to appear on the Creation stage; the fourth character, the talking serpent in the tree, doesn't show up until after everything is finished and a Garden is planted in Eden.  The fifth and final character is an angel (with an interesting flaming sword) stationed at the gate barring entrance to the Garden.

Well, obviously, all of this is food for some serious speculation; I believe it bears thinking about.

Was Jesus just speaking metaphorically when He referred to His followers as "Lights of the World"?  Probably, since they had no physical light of their own; all they had was intellectual information about Jesus and the Father.  While Jesus was here, He appears to have been the Lightbearer — at least to humanity; after He left, His followers took up that job on the earth.  Is it possible that, in addition to His High-Priestly duties, Jesus is also now the Heavenly Lightbearer?  Maybe.  He told Philip, "If you've seen me, you've seen the Father."  If we've seen the Father, what more do we need?  Is there any other light necessary? 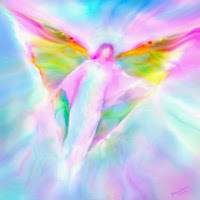 But on the other side, when evil shall have been done away with, and things continue the way they should have, will there be any more need for a Lightbearer — in an intellectual sense?  If there were a need, it would suggest that we will still be relying on the created, material world to teach us about God, just like before the fall in Heaven.  Lucifer had a job which was above all others, which appears to have put him in the position of explaining aspects of God to the rest of the created beings.  This exalted position of Lucifer was one of the elements he used in the deception of an unnumbered host of the angelic realm, though there is no mention of beings other than the angelic realm being taken in by the deception.  As a side note here, I guess it's possible that to Lucifer, it didn't seem like a deception at all; his attitude may have seemed perfectly legitimate.

I hope you'll appreciate my curiosity about how we might learn about God.  The entire creation appears to be a grand, living encyclopedia itself bearing light to anything that has a mind capable of a faint comprehension of God.   How long this object lesson has been needed is unclear, and how much longer it shall be necessary also seems unclear.  I guess we'll have to wait and see.

Another thought on Lucifer: he appears to have been created a musical being, and it would seem that this capability would not have been given at random; God doesn't strike me as being random.  "Lightbearer" and "Musical" seem to be a left and a right hand of a complete information package designed to enlighten.  I reckon I'll leave that thought hanging for now, since I don't really know what to make of it.

The above is almost a splash of thoughts, and I really don't like much of the grammar and punctuation.  I'm tempted to just park this post in a draft box somewhere; we'll see.

I'm really not interested in the slightest regarding learning about Lucifer, aka: Satan.  I am, however, interested in the job he had and why it was necessary.  It just seems there's a lot left out of the Heavenly story.  Lifting the veil appears to require more intellectual and spiritual strength than we presently possess.