"Do I Even Speak the Language?"

Have you ever wondered why God seems more interested in spending money on clean-up than on prevention.  Take the time this next week to keep up with the amount of flooding, earthquake damage, battlefield injuries and fire that will ruin the lives of many citizens of planet earth.  Perhaps some gunman will run through a crowded mall or whatever, and wildly discharge his (I would say "or her," but for now it doesn't play out like that) firearm.  Another notable celebrity will probably depart this life in some avoidable fashion, leaving us scratching our heads — again.

In the wake of scores of disasters that befall our world come the countless stories of God sending in the missionaries to provide hope where hope was gone, or pallets of food and blankets when the shelves emptied.  Doctors and nurses span the globe providing medications to either cure or prevent disease that is often the result of yet another natural disaster. In other words, some crew will inevitably arrive to mop up.

When you think about it, it doesn't take long to realize that much of the trouble on our planet could best be handled if we were given a little heads-up ahead of time: "Don't build your home there;" "Don't get on that plane;" "Don't start that fire;" "That strange-looking man outside the movie theater, he's got a gun and bad intentions; tie him up."  The list is as long as you have an imagination for, and once you've thought it through, you realize it doesn't take a degree in rocket science to help you assemble it.

God appears to have a rather special view of information and time; a view to which you and I are not privy.  If He wants to announce a prophetic event thousands of years ahead of schedule, well … it's a simple thing for Him to work it out.  So what do we suppose is the problem with what you and I call the here and now?  Has there been some oversight on the part of God?  Is He silent for some vastly bigger plan?  Anybody remember the movie "Fiddler on the Roof"?  There was a song, "If I Were a Rich man," with a line that ran something like "Would it spoil some vast eternal plan … If I were a wealthy man?"  The frustration with which we meet the incomprehension we suffer regarding the purposes of heaven knows no limit.  No, it's not just you; I had to read that sentence several times through, slowly, myself, just to make sure I had a good handle on what I meant. 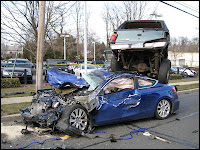 It does seem odd, doesn't it?  I mean, those of us with children we love would spend a lot of time trying to reason with our teenagers that this or that is perhaps not the best thing to do.  We would take time to show them some examples of how a life might turn out when the owner thereof makes poor choices.  Now just imagine that you and I had a window into the future; we wouldn't have to guess about anything — we would know how it's going to turn out.  Ah!  There it is.  We would know how it's going to turn out.  We're not talking about Scrooge's third night visitor who only shows him what might be.  This is how it's going to be.  So now we're faced with the decision of whether to tell our children how bad it's going to be, or to just keep silent and let them handle it.  We'll stay close, just in case they need us; but this is their moment.

I have no doubt that God can change what we call the future.  But if He changes something, if it doesn't work out the way He saw it, did He actually see the future, or did He just see how it could have turned out?  And for God, is there any difference?  Imagine a huge long pause here while I think this through ..................... And I'm back with the same blank look on my face. 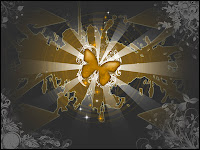 From time to time we hear the expression "The Butterfly Effect," the idea being that a butterfly beating its wings on one side of the planet can cause a typhoon on the other.  Honestly, I'm not sure that I totally buy into that concept, but I do clearly get the picture that the things we do, the way we behave, things we say, set in motion events that are far outside our comprehension or control.  I'm a firm believer in the power of influence; just the smallest gesture of kindness can soften, to some extent, the heart of the hardest nutcase.  But it's not a guarantee.  There are, of course, many other ways to affect the world around us; just try driving on the wrong side of the freeway during rush hour, that'll cause a breeze between someone's ears.

We have to ask the question, why doesn't God give more immediate — not thousands of years — immediate advance warnings of trouble and disaster?  What purpose might be served by allowing a tsunami to wash across the land and sweep away, not thousands, but hundreds of thousands of, dare I say it, innocent by-standers?  Are there no text-messages of warning?  Out of all of us watching and listening to the broadcast coming down from Heaven, Did nobody get the memo?  Nobody?

Well, of course, no one knows any of these answers, except, perhaps, God Himself.  Or perhaps the answer lies not so much in why He doesn't tell us, but rather in why we aren't listening.  I refuse to believe that God cares nothing for those who die or for those who remain to mourn.  The citizens of planet earth appear to me to be much like a teenage collective; we know it all, and we've got it covered.  One day your child shows up in tears with a broken heart regarding this or that; another one spends the next ten years of life behind constant lock and key.  And all because of circumstances that could have been avoided — if they would have just listened.

And there, of course, lies part of the problem with communication.  Wisdom is trying to share its advice, but the listener hears a totally different language; it's almost like the parent is speaking in tongues — with no interpreter.  It's been this way since the beginning: "Don't eat that fruit!"  "Don't bow down to that god."  "Don't behave like that."  And for some bizarre reason, man does it anyway.  What more do we think God can do?  If we had a heavenly dream filled with divine instruction, we, or at least the people closest to us, would likely put it down to indigestion.  If God were to write His will in the sky, we'd start looking around for the stunt pilot. 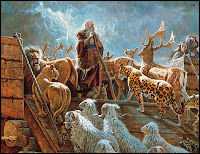 We are unfamiliar with the language of heaven, and often refuse to observe even the signs in the natural world.  I mean, I imagine there were an awful lot of open-mouthed people watching as groups of twos and sevens of the animal kingdom made their deliberate way to the Ark of old, but is there any record of a single soul outside of Noah's family staggering to the door requesting entrance?  Were there no children curious enough to become the first recorded stowaways?

Where are all the good psychics when you need them?  I imagine they're out there still trying to have their first big win.  I don't think I've ever seen that headline: "Physic Wins Lottery — Again!"

All joking aside, whatever the reason that God chooses not to be emphatic with us remains to be seen.  But I imagine that somewhere beyond the veil, preparations are being made to make it very clear why things have gone the way they have.  For now are we seriously going to accuse the single wisest Person in existence of falling down on the job?  Perhaps when our kids talk to us that way, they have a pretty good point; after all, we're only human, right?  We only see so far.  But blindness is not a condition from which God suffers.