"Home Is Where the Heart Is … Satisfied" 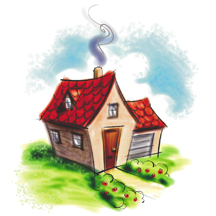 Most of the people with whom I share an orbit are living in some place other than where they grew up.  Over the years they’ve traveled here and there, and for the most part they are very happy about where they have settled down.  They’ve reached an age in their lives where they are finally living where they have chosen.

Most of us learn to navigate around the idiosyncrasies of the place we presently call home and are very happy to ease into the surrounding society.  But every now and then we get the chance to return to the place of our childhood, and something happens to us.  We feel older in the body, but a place in our minds which has long lain dormant awakens, and friends long gone are quickly remembered.  Songs we used to sing echo between our ears.  The familiar smells and sights and sounds return us to a place in time when the world seemed simpler, easier to handle; questions were fewer — less complicated.  The realities of being “grown up” were for a much later time. 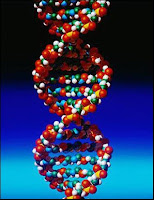 Many of us have the place of our ancestry built into our genes, only to find those genes awaken when we visit the places of our fathers.  An inexplicable sense of belonging, or feeling “at home,” takes over our central comfort system and we feel we are visiting a place not at all unfamiliar.  We can’t explain the sensation, but we can certainly feel it.

The saying goes that “familiarity breeds contempt,” but for some people familiarity gives a sense of stability, comfort and security.  That’s kinda the place I find my own self.  I’m not afraid of change, but I prefer things to stay pretty level.  I’ve never gotten used to losing people to any kind of sickness or accident; I’ve learned to live with it — but I hate it.  Every year a series of funerals and memorials reminds me that planet earth, as much as I love it, is a very temporary existence — for now.

Recently all the girls and I visited Orlando in Florida.  We spent time at Epcot (used to be written EPCOT — the Experimental Prototype Community of Tomorrow.  But … things change).  We looked at some of the rides, and that was nice.  But the highlight of the visit, of course, is the time spent visiting the countries represented around the lake.  I visited Epcot the first year it opened in 1982, and one of the must-see places around the lake for me was England.  England is cleverly tailored and decorated and is worth a look.  The next day we visited Universal, a very different Park from Epcot.  Universal have built a section of the Park to represent the world of Harry Potter, and it really is a top-class depiction of Olde England, the one you think of when you read about the historical kings and queens or William Shakespeare.  When the sun went down and the shop lights came on I felt I could have spent the whole of our vacation just wandering around the streets and shops of the place, and would have been thoroughly contented.

I suppose I would feel different about England if, say, I had feared for losing my life to rebels or if I had faced the daily prospect of starvation.  But I didn’t, and the memories hold for me a place in time that I would love to re-visit; not to change anything … well … perhaps some things, but mainly as a spectator, re-living and enjoying many of the things and people of my past.

Occasionally people ask me what I miss about England.  It’s really hard to say.  Sometimes I miss the sights, sounds and smells of Northern England — miles of unspoilt countryside; the special sound that crows make when perched on the roofs of houses in the village; the smell in the air of coal burning on a crisp summer morning.  Roundabouts; the Milkman; Savoury pies and Cornish Pasties.  Sometimes I miss English chips — a portion of which can fulfill the needs of an entire meal.  I miss the Branston Pickle, and the real English Cheddar or Cheshire that goes with it.  The English breakfast “Shreddies” are on the list, as are Cornish Wafers.  In some towns in England there are as many Indian restaurants as there are pubs, and if you like Indian food, which I do, England is a place where you can find lots of it.  And I miss it.

Of all the things an Englishman misses about the Mother Country, top of the list has to be the way English people communicate with each other.  The sense of humor in England is a lot like you see on BBC America — but without the canned laughter.  Much of the way English people get understood by each other is bound up in harmless innuendo, using common phrases from TV commercials or soccer slogans.  Some that quickly come to mind give away my age: “Neat, Eric;”  “Nice one, Cyril;”  “I’m only here for the beer,” and “As versatile as an egg.”  All these and many, many more are used to convey approval or disapproval of … well … just about anything.  In America, the closest to understanding this phenomenon might be gained by considering, “Where’s the beef?” or “No, but I did stay at a Holiday Inn Express last night.”  Maybe even, "Can you hear me now?" 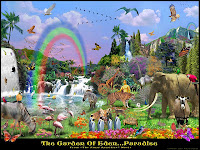 Bringing these thoughts quickly down to earth, I imagine there is a place embedded deep in the genetic soul of each one of us that longs for a time when things were much, much simpler — think, The Garden of Eden.  That sense of not quite belonging is probably a carry-over from that short period when everything was right, and holy, and beautiful, and good — and complete.  The need for these things is incredibly persistent; no wonder people try to find ways to stifle it and cover it up.  There’s a hopeless cause if ever there was one.  I imagine it’s like trying to take the English out of the Englishman, or America out of the American, or whatever.  Some things are worth fighting for.  And some … are not worth fighting against.

One day I believe we shall find ourselves in a place and Presence with which we are not unfamiliar or of which we are not ignorant.  The place of our Father is written all over us, and in and through us.  How could we NOT feel safe in His company?  After all, that’s where we came from, and "…No man ever yet hated his own flesh, but nourishes and cherishes it …." Ephesians 5:29.