"On Predators and Prey" 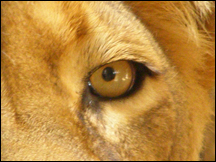 
Much of the natural world surrounding us is absolutely beautiful.  We see stunning colors that bring buoyancy to their surroundings, shapes that have inspired countless varieties of lacework, scents that dare the chemist to do better.  And tastes … mmmmm … flavors that … well … flavors that make your mouth water.  Worldwide there are living, breathing creatures that cause even those of us with the most stuck-up disposition to wimper, “Awwwwwwww.”

But there’s also a lot of ugly.  Ugly that makes us scowl.  Ugly that really sets up the hairs on the back of our necks.  Ugly that we prefer not to think about, or refer to, when we are considering the beauties of God’s creation.  We love to watch the gazelle springing across the plain, but we turn our heads when the cheetah causing the sprint comes into view.  The owl and the eagle are majestic and beautiful — until we consider their diet.  Those gorgeous swallows with which I one day hope to fly are making such acrobatic aerial manoeuvres because they are pursuing lunch.

It’s easy to look at all things bright and beautiful and envision the splendid, glorious nature of God.  We view a God of order, precision, of infinite (and microscopic) wisdom Who can as easily plan a galaxy as He can a forest, and fill them both with all things living.  But it’s perhaps not so easy to see the same God in the swamp or the compost pile.

To the eye of appearance there seems to be a divided handling of things on the planet.  Half of the creation appears to be under the control of someone who appreciates and generates beauty, and is able to maintain that beauty, while the other half seems governed by someone who either enjoys ugly, or who simply can’t get his beauty-shop act together.

Of course, the math holding both decks of cards together is exactly the same.  Once you get below what looks like a whole lot of random rocks strewn around, you find some incredible mathematical gymnastics going on — right down to the elusive power holding together an incredible amount of destruction within each atom — within each atom that exists.

So why the contrast?  What’s the problem?  Here is where Evolution Theory and Big Bang Theory are totally at odds with each other.  The former proposes that everything in creation is getting better, while the latter predicts that chaos and yet more chaos are all we have to look forward to; and this, they say, is observable — at least, over billions of years.  Well, good luck getting THAT into your test tube.

For a moment forget what was or what will be.   RIGHT NOW the world is a mess, and getting worse.  I forget the exact estimate, but it has been suggested that shortly after the event that caused the demise of the dinosaurs, 90% of living species on the planet ceased to exist.  That’s 90 — nine-zero — nine-tenths of life on earth was extinguished.  Since that time another alarming amount of species have their lights go out every day — every day.  That really doesn’t make for good news, so that kind of track record doesn’t make it, at least for very long, into the headlines.  How inspiring would it be to lose a member of your family each day for the whole of your life?  You get the idea.

Most of the creatures on the planet really don’t get a choice regarding whether they shall be prey or predator.  I mean, a weed is a weed and is not likely to start bearing mangoes.  The big cat has to eat, and a plate of veggies won't work for him.  Jesus spoke very curiously about life on the planet: “Grass of the field cast into the oven;” “You don’t gather figs from thistles;” “The leopard can’t change his spots.”  In other words, it is what it is.

Much of the planet is beautiful; but there is a dark side.  Carnivores devour their prey until the prey is scarce, then the carnivore dies back until the prey can recover; then the carnivore is strong again.  But notice that the prey (generally a herbivore) never becomes the predator, at least, he doesn’t take the life of a creature with a mind.  He has his place in the food chain, but he eats recoverable, renewable resources.  Even the by-product of what he eats is beneficial to the sustaining of life.

When it comes to man, we appear to have a choice in how we shall behave: “Choose ye this day….”  I’m reminded of a nice turn of words I once heard; don’t take the time to look up the source, it will only detract from the thought.  But it goes like this, “We've all got both light and dark inside us. What matters is the part we choose to act on. That's who we really are.”  And there it is — choice.  For some of us, doing wrong comes very easily.  For others, doing wrong causes the wrongdoer awful pain and guilt.  Some of us find it very easy to hurt others, with our actions, our words, our withholding of words.  It’s perhaps easier to talk ABOUT others than to talk TO others.  It’s easier to make people our prey than to help protect them from predators.  Too costly to step into their world and try to help them escape the roaring lion that’s walking about with the intent of devouring them.

On the other side of the veil of separation, when everything is made new, I honestly believe that there shall be nothing ugly, nothing to set our teeth on edge, nothing to cause us to wish to look away in disgust.  No one who shall say, “Ouch.”  No pain, no hunger, no arthritis, no cancer.  Nothing but beauty — and peace.  A world and everything in it set up to complement and sustain everything else in existence.  Nothing taking for the sake of taking.  No loss of life in any sense.  How all that will work I have no idea.

But on a closing note, it is interesting to notice that right now God takes all that ugly which winds up on the compost pile, and in time, turns it into something that itself brings life and nutrition to where there once was nothing.  I’m not sure what to do with that thought, but maybe God is showing us that, in the end, all this ugly will have served a purpose, and will one day only cause us to grow the stronger and taller.  Oh, I hope so.