"Life and Other Puzzles" 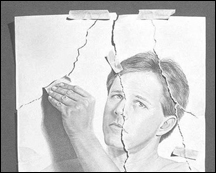 You don’t need a degree in anything to recognize that the world is full of stuff that doesn’t seem to make sense.  Anyone who’s ever made a compost pile will tell you that in the garden nothing need be wasted.  What?  Useful? That nasty, smelly, ugly pile of weeds and clippings?  No way!  Yep, everything in the garden that has life in it can be recycled — everything.  But when you look at the condition of the material that constitutes the compost pile, you ask yourself, “Can any good thing come out of THAT?”  The pile oozes indefinable liquid; it smells awful; there are flies and bugs and … well, you get the picture.  From time to time the gardener will shovel and fork the pile to stir it up, then he leaves it — sometimes for a long time.  The pile sits over there in the corner of the yard until one day, maybe two years later, the gardener pulls back the top material of the pile to reveal a treasure trove of lush, rich, organic material that, once applied to the vegetation around the garden, gives a plant very little opportunity to resist the art of growing.

It appears that the passing of time has a way of turning useless into gold dust.  Anyone who has ever read a story about the discovery of an old classic car being uncovered in some barn on the back edge of the property will realize that what might be considered junk can suddenly be recognized as treasure, worth much more than the original price tag.  Historical artifacts both recent and older gain even more value as they become more rare.  Just recently I read an article about a British World War 2 plane being discovered in the Sahara Desert seventy years after it had crashed.  Apart from some crash-landing damage, the plane is in almost pristine condition.  You can safely bet that a fortune will be spent in getting that lump of metal back to some museum in London, ‘cause you don’t find many of those lying around.  This "value" mentality is puzzling. 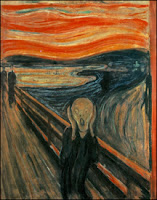 We’ve all read the stories about those famous European artists who were paupers in their own day.  Incredibly, at auction recently Munch’s "The Scream" sold for a cool $120 million — an oil painting that probably cost pennies to produce in its day.  The same can be said about many famous classical musicians (do some research — you won’t have to dig very deeply).  Even Shakespeare was not a wealthy man, just a humble playwright who felt he had something to say.  Many famous politicians have gone from front-center on the world stage to relative obscurity — in their own day.  It happens to modern-day musicians; “Where Are They Now?” is the name of a show from which lots of money can be made.  Even the FALL from fame appears to have appeal.  Puzzling.

It seems that a lot of what people produce has to age a little before it can gain any value.  Just like that compost pile.  It makes you wonder why some people can’t be born at the right time, instead of ahead of their time.  But we see this principle being worked out regularly: connoisseurs will tell you that a wine or a brandy has to “age” before it can be considered mature.  Some cheeses, such as Parmesan or Stilton, have to take the rite of passage before they can be considered “ready.”  Caulk must be given time to “cure” before it may be painted or can bear any weight.  Primer has to dry before the final coat can be applied.

Some things are just not complete when first prepared.  Wood stain must have time to “sink in” and dry before you can go any further with the piece of furniture.  And, of course, the grain of the field must be given time to fill out before we can enjoy a meal of corn on the cob, or make bread.  Then there’s the yeast, the leavening;  After mixing the flour and yeast it is necessary to walk away and give the mix time to work, to “prove.”  Only once the dough is proven can it be finished in the oven.  And only when the baking is finished do you actually have bread.  Making nut butter for the first time causes the person doing the job to doubt if this is ever going to happen; the food processor is working, working, working.  Minutes go by as the warm nuts are ground to a grainy lump in the container.  The lump gets thrown from side to side; and then — in an instant — the mass breaks and the processor produces what clearly resembles the finished product: nut butter. 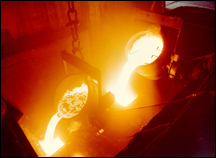 In the preparation of metal a plan must be followed; it would be pointless to try to purify the iron or the gold, or copper, or any other metal, if you hadn’t taken the time to fire up the furnace.  Once in the smelting pot in the furnace, patience must be exercised as the heat slowly melts the metal.  This process of heating and removing dross is called “trying” the metal.  The dross, which rises to the top, may be removed only when the metal is molten.  The process of removal is as simple as skimming the top of the metal with a ladle.  Not until the metal has been tried does it make any sense to pour it into the mould.  Everything in its time appears to be a well-established recipe for success.

I was musing to myself recently that sometimes the affairs of life can be very confusing.  It’s like you’ve been handed a box filled to the top with puzzle pieces.  As you look at the pieces, you can make out the image of this or that on each piece.  The deeper you go into the box, the more you realize that there are layers below layers of smaller and yet smaller pieces.  And then you realize that you’ve been given lots of puzzle pieces, but what’s missing is the box top that shows you what the finished product is supposed to resemble.  Oftentimes the pieces will “fit” together, but they don’t “belong” together.  After much trial and error, one day you feel like you’ve finally got it figured out; but there are still a few pieces left over; some things you don’t know what to do with.  Much like after a lawnmower or some other contraption that has been fixed and put back together; there’s a handful of little parts left on the ground.  The machine still works, but you know that something is not quite right — at least as far as the original intent is concerned.  For now things are working, so you go on, hoping for the best.

Occasionally we see a spark of hope as we go through these “trying,” “proving” times of life.  Perhaps the biggest lift of encouragement comes from spending time with those who have spent time watching and facilitating these processes in the garden, the kitchen or the foundry — and have survived.

In the garden, from time to time we are given a glimpse of hope when one day we cast an eye upon the compost pile, and we see a “volunteer” being born; a seed from cast-away kitchen scraps brings new life from what looks like a hopeless case and in the most unlikeliest of circumstances.  The new plant will continue to grow healthily right where it is, or it may be safely transplanted to a grow-bed.  Either way will work, and you'll be able to eat the fruit of the plant.

In our own eyes, our circumstances are far from perfect.  Even under the best conditions we are still living on a planet that is wearing out and laboring under the strain of neglect and exploitation.  But given time I believe that all of the conditions we experience in our lives are working together to make us better prepared for a purpose that we don’t yet see or comprehend.  Whether we are in the compost pile, on the artist’s palette, the baker’s proving table or the smelter’s furnace, we are all being processed for a greater work.  The process of preparation is not the goal.  The goal is the goal.  Proving, trying and processing are necessary, and they take time, but they are only a means to an end.

Right now we seem to be just a mess of notes making noise from measure to measure.  Only when the composer puts the final touch to the score will it be prepared as a symphony.

It’s all so very puzzling sometimes ….