"A Question of Support"

Right now is Olympic Season.  You know how it goes: countries from all around the globe send competitors who are at the top of their game to the Olympic Stadium, Arena or whatever to bring home the Gold, Silver, or at the very least … Bronze.  Most of the athletes return home with only tears, but also with an experience that will last them a lifetime.

"London 2012."  Just the sound of it makes a Brit proud to be a member of the host nation.  Sure, it would be nice if Britain got more gold medals than anyone else, but I reckon the nation would be glad if we got just one: Andy Murray for Tennis.  It would be really nice if we could bring home the cup for Wimbledon one year, but an Olympic Gold will do for now.  Forgive my playful facetiousness; talk to most Brits and they'll tell you they are sportsmanlike enough to cheer for whoever is playing well.  If we could, we'd be happy to adopt Roger Federer — even Bjorn Borg, if you can remember that far back.  John McEnroe?  Not so much.

But here we are at the Olympics watching the best of the best do their thing.  For many evenings during these Games my family and I have been on the edge of our seats watching the swimming, floor exercises, high dive and track events.  Apparently, one of my faults is to applaud those who do well but are not who we want to win.  "Shhhh!" my girls tell me, "Don't cheer for the Swiss or the Jamaicans or the Belgians!"  My positive response to a good play is totally involuntary.  A good touchdown pass is a joy to behold; any one of David Beckham's goals is a thing of beauty, and a good passing shot from either side of the tennis net is worth the price of admission.

This view of mine makes me a poor opponent.  I have played goalkeeper for many soccer teams in my time, and have always had a hard time not praising the effort and finesse of the player who sent me picking the ball out of the back of the net.  I enjoy playing tennis, and I like to compliment a good move coming from the other end of the court.  It's just the way I like to play. 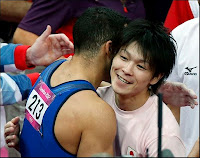 Back in London it has been interesting to watch this spirit playing out among some of the younger gymnasts.  At the top of the bill have been the usual Americans, Russians, Romanians, and a few Chinese this time around.  It just seems to me like the US girls and guys have been quick to encourage the other teams' efforts.  A surprising attitude, considering everyone's going for Gold.

Let's take a step sideways for a moment.  My family and I attend the services of several different churches, mainly because we have friends and family scattered across many miles.  In another universe I imagine I could have pursued the career of Psychology, because I really enjoy people-watching, and I often have the tendency to laugh (under my breath sometimes) at the behavior of others.  In any given group of church people (of all ages) there are those who find it easy to encourage and praise those who have done a good job — at whatever — or are doing the best they can.  If ever there was a place where we need to be encouraged to keep on keeping on, it's here on earth.  Unfortunately, there is also an equal and opposite gaggle of geezers who do very little but criticize the feeble efforts of those whom they deem unworthy of praise. It seems to me that this latter group would do well to take a leaf from the folder of this year's Olympic team.

I mean, seriously, this spirit of always knocking down others is really getting old.  This attitude we expect from politicians, not from those "Bound for the Promised Land."  Are we so threatened by those in the other pews that we have to constantly question their methods or blacken their motives in order to make our own look saintly?  Are you so unsure of your claim to the prize, that you feel you must frown at all those on the same road heading for the podium?  If so, you really shouldn't be so concerned; there's plenty of gold for all at the destination just ahead.  Relax a little.  There's good Biblical counsel for the praise of others.  Better you do it, than they should praise themselves.  At least, that's the principle laid out before those on the straight and narrow. 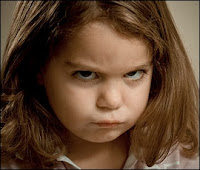 On a positive note, I personally believe that these kids across the water will lose nothing by showing their appreciation for the other teams.  In fact, I reckon they just went a notch higher in the estimation of all things that mean anything on this planet.  I suppose if you're going to err, err on the side of mercy.  After all, a dead opponent can't make any improvements — right?  If you want to go higher in your game, encourage your opponent to do better, and be quick to praise — not flatter — his or her best efforts.  You should especially adopt this approach with your team mates — as quickly as possible — if you ever expect to get anywhere worthwhile.  Oddly enough, it appears that we people are the rungs in our own ladder that leads upwards.  The way we treat others is the way we can expect to be treated; so be careful how you tread on those rungs. 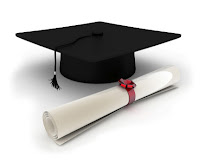 And perhaps when it comes to all things religious, it's probably a good policy to not look too far down the nose at those who maybe don't quite see it your way, or haven't yet elevated to your level of study.  Some people have a family … and a job — sometimes two jobs; and then there are the people who are busier living the life of Jesus than getting a diploma in the Person of Jesus.