"The Contrast of Hope and Power"

In the past couple of days my family and I have watched a portion of the celebrations held in honor of Queen Elizabeth II’s Diamond Jubilee — sixty years in office!  Now THAT’S something to have on your resumé.  So much devotion has been displayed by the subjects of a Monarch whose office has seen many other Heads of State come and go seemingly so fleetingly.

Great Britain, the largest Empire ever to have existed on the planet, once gave one full quarter of the population of earth the right to possess a British passport.  But those days are long gone.  Britain has all but drawn in the oars and returned to pretty much taking care of its own shores;  and, we might add, likely breathing a sigh of relief at the same time.  It’s not easy keeping the masses at ease, as any leader of any empire throughout history could tell you.

Through my years of watching the British handling of affairs, and also through my skimpy study of British history, I can’t help but notice that Britain has occupied a position of power on the planet that at times has been quite unreasonable.  From way back then to right now, directed by people behind an incredibly small collection of chairs and tables in the London Parliament, Britain has been victorious in battle over countries that are far larger and have had access to incredible supplies of battle equipment.

At the time of this writing it is June 6 and I’m thinking about the D-Day Commemoration of the battle for the beach at Normandy in France.  In roughly 5 years the Nazis had slithered across half the planet in their campaign of terror, and a thin body of water, known on the English side as the English Channel, was all that stood between them and certain undeniable domination of Europe.  Just under 25 miles from France at its shortest crossing, this body of water prevented the German war machine from rolling across the Thames into Parliament and sitting on the seat of power controlling a large portion of the planet. 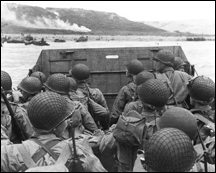 It just wasn’t to be.  The Brits and the Yanks took the battle to the aggressor and, after incredible losses of allied lives, finally turned the tables on the Second World War.  What a surprise that must have been for the Nazi infantry.  The German gunners were well dug in, and all they had to do was unceasingly unleash the hail of lead across the sand to stop the invasion.  But the mass kept unloading from the boats, kept inching up the beach, wouldn’t stop coming.  Can you imagine how discouraging that must have been for the Nazi gunners?  This “Super Race” of killers had considered itself undefeatable.  And rightly so; they had incredible war tools at their disposal; cannons that could shoot a shell all the way from Central Europe to London.  They had access to missile technology which rained terror from the skies over London in the form of the V2 Rockets.  And here by the seaside they were pushed back by a sea of humanity determined to put an end to this reign of hell.

When something is worth fighting for, it is incredible to watch how many times the fighter will get up off the canvas and press forward.  This type of unreasonable persistence in the face of unreasonable odds is so very confusing to the opponent.  When a powerful fighter gives all he can to the battle, and his weaker opponent, though hurt and wounded, won’t stay down but keeps returning to the fray, it’s just a matter of time before doubt creeps in to the mind of the giant and suggests that this fight might not be won.  Desperation causes desperate people to do stupid things.  One of the last stupid things the German prison camp warders did before the allied liberation was to burn the camp records along with the camp inmates before turning tail and heading back to the Fatherland. 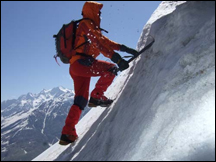 When I was a younger man I used to know my way around a boxing ring, and I watched my fair share of boxing line-ups.  I watched a lot of wins, and, of course, a lot of losses.  One of the things you learn to predict regarding the bout is that the fight is NEVER over till it’s over.  I have watched a boxer dominate the entire fight through most of fifteen rounds, out-manoeuvring his opponent, exercising greater strength, greater skill; demonstrating cunning strategies for overcoming his weaker opponent.  Is that a smile creeping across the bully’s face?  Why hasn’t the towel been thrown in to save the fighter taking this unreasonable beating?  Why does his corner keep wiping the fighter down and greasing his cuts and bruises?  Why doesn’t the weaker warrior just throw up his arms in surrender?  The reason is that the fighter has worked hard to get here, and the team in the corner know that all the while their man is on his feet, there is HOPE.  And hope causes people to keep going, seemingly unreasonably — up the mountain, across the sea, across the desert, to the North Pole, the South Pole, across the battlefield, through outer space, and … up the beaches of Normandy — and across the square-shaped boxing ring.

There is a level in the spirit of man which very few ever discover; it requires a special elevator to ascend to the story that causes one human being to gamble their life for the saving of another.  We all have this story, whether we know it or not, and occasionally we are given the opportunity to go up and stand between the bully and his prey … come what may. 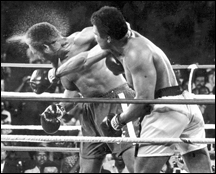 A self-sacrificing attitude causes confusion in the mind of the monster and makes him wonder what kind of secret weapon his scrawny opponent might be hiding.  He begins to consider that he might not win this fight, so he gets angry, fights harder.  His opponent is hurt but is always watching for a window through which to hurl a counter-attack.  Back in the ring, in the fifteenth round, the brute in his mind is rehearsing his victory speech; for a moment he loses his focus on the task in front of him; perhaps a little over-confidence creeps in so that he’s spending more mental pennies on attack than dollars on defense, and suddenly — an opening.  The fighter in front of him launches one swift volley of punches, and the big fella hits the canvas out cold — that quickly — LITERALLY.  I’ve watched this more times than I can remember.  Anyone remember the Ali - Foreman fight — the Rumble in the Jungle?  Classic predator-prey turnabout.

It is this demonstration of the victory of hope over power that has fueled many a revolution on the planet.  Mark Twain, in one of his books, observes that no revolution has ever been won by people nicely discussing the issues around a shiny table; change is only brought about by the shedding of blood.  The walls of our homes, the panels of our vehicles, the attractive landscapes of our cities are all clothed with the blood of our ancestors.  It is the victory which they gained that will give us hope to fight the battles of our tomorrows, even though the foe may at times appear invincible.  And perhaps it is the failure of the bully’s ancestors that will cause him to think twice before once again throwing his weight around — because the fifteenth round is always lurking and looking for his demise. 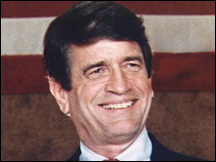 Much of the world wakes each morning to the fear of the bully.  It appears that “I” can do very little to help that.  But occasionally God calls on someone less-than-saintly (can I hear someone say “Charlie Wilson”), and changes the lives of countless Afghans living under the oppression of the Soviet Union’s helicopter gunships.  It appears that God still chooses the path of least resistance, and in that instance Charlie was the man willing to be the funnel instead of the plug.

If you are looking for a call from heaven, try to think more unreasonably.  Do you remember the song, “Anything you can do I can do better....”?  Expand the words a little: “Anything ‘I’ cannot do ‘I’ CAN do ...” when I am empowered by Heaven.  Imagine yourself standing in an elevator with your finger poised to press the button to floors with titles that look reasonably comfortable:

But there’s also another button marked “Penthouse.”  Alongside that button is this title:

Maybe that sounds too good to be true.  And maybe it’s just too unreasonable for my level of intelligence.

Go ahead.  Be unreasonable.  Push the button.  Make a difference in someone’s life.