When you think of the word "lost," a whole series of thoughts come to mind: "I lost my keys;" "We lost the cellphone signal;" "We took a wrong turn and now we're lost;" "The ship is lost at sea;" "Lost in love;" "We lost the game;" "The dog went chasing after another dog, now he's lost."  These and many others help us to understand our relationship with something we once enjoyed or once had, or could have had; now it's gone, perhaps only for now — perhaps forever.

When you step into the world of religion, "lost" can take on a whole different meaning.  In Christianity, lost is something to be avoided at any cost.  Lost is a phenomenon the Christian devotes his or her life to the saving of, if it be possible.  Lost is that sheep the shepherd goes out to find.  Lost is the soul that strays from the straight and narrow.  Lost is the one who goes into the grave without Jesus in his or her life.

But what are these lost ones … lost from?  Are we part of some game being played, and we're the pieces?  Are we the wager?  Are the lost dealt some kind of losing hand that never has a chance of winning?

It's a little risky, but I'm going to air out some thoughts for which I currently have no conclusion.  Perhaps in trying to find the right words, something will get clearer for me.  Supposedly this is good therapy — for something.  Here goes:

From our earthly perspective, it is easier to get lost than to stay on any kind of course.  The more the road weaves or the terrain changes, the more likely we are to lose our sense of direction.  "Keep your eye on the sun," I hear someone say, "Get a bearing and keep that heading."  That philosophy is fine until you get into a place like England or the northwestern USA, under almost total cloud cover much of the time, where east looks exactly like north, south and west.  Navigating through mazes was once an extremely popular pastime for the upper classes in Europe, and the inability to know your direction could turn out to be a near-fatal setback.  A person can be at a great disadvantage if he or she cannot see the sky. 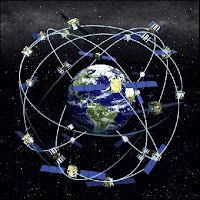 From God's perspective, nothing has been lost from His attention — ever.  It doesn't matter how deep you go, or how high you climb; or, Brother Jonah, how far away your ship is sailing.  If it were possible for us to get stranded somewhere on the other side of the galaxy, we would then be able to accurately say that we are lost, since we have no chart to get us home.  However, our coordinates would not be unknown to God, the only One with a map of everything that has ever existed.  We might say that God has the ultimate GPS system (we should probably call it a "Universal" — "UPS" system, since it's far more than Global), and every — every — microscopic droplet has its own activated DNA/RFID tag programmed into that system.  God has no trouble locating even a hair that might have strayed from your head … anywhere … anytime.  Now, that's a big thought — for us; but not for God.

When we say a person is lost, what in the world do we mean by that?  The Bible says Jesus came to seek and to save the "lost."  Did He find them?  If He did, can they still be lost?  If He didn't find them, why didn't He?  How can someone be "lost" when they have been found by God?  Sounds like double-talk, doesn't it?  "Semantics!" I hear someone whimper from the cheap seats.  But I ask you, if the answer to a simple question doesn't lie on the surface, what on earth is the meaning that Jesus is trying to get across?  In the parable, the shepherd found the lost sheep.  In another parable, the lady found the lost coin.  In yet another, after finding the jewel, the entire field was bought.  The only questionable parable appears to be the one where the fig tree is given one more year to bring forth a fig, and if barren after that — chop!  The parable is not given the ink to develop itself, so we have to make interpretations that suit our inquisitive minds.

Let me do some thinking aloud:  Perhaps the lost are those who are going about their business from day to day like that numberless group of people who were killed at the flood.  The Scripture record is that the antediluvians (those who lived before the flood) took care of their affairs without a clear comprehension of what was about to tumble from the sky.  Sure, they'd heard the banging and cutting going on during the building of the Ark, but any warning of what the Ark would be needed for fell largely on deaf ears.  Perhaps this mindset fills the majority of us on the planet; we scrape by day after day, year after year, largely unaware of the Main Event approaching the galactic horizon, namely, the Second-coming of Christ.  It seems that much of the Christian world gives little air-time to the very event the early believers lived for — the return of their Lord.

Here's a scary thought: those who were closest to Jesus were the ones who ran the farthest when He was taken by the mob to Pilate and Herod — with the exception of John, who somehow managed to avoid an inquisition like that which Peter later regretted.  These men who had seen so much demonstration from the heavenly realm were likely bewildered as to why Jesus would allow Himself to be taken like that.  But were they lost?  They may have lost sight of Jesus, but He had not lost sight of them — right?  After the resurrection, Jesus took great steps to convince these bedraggled-in-spirit traitors that there was a place for them in His Kingdom.  He even walked all the way to Emmaus in order to strengthen the faith of two outer-edge disciples, only one of whom we have a name for.  If you'll check it out you'll find that Emmaus is a 7-mile walk from Jerusalem.  Perhaps more interesting is that when the three travelers arrived in Emmaus, two of them walked all the way back to Jerusalem, filled with the excitement of the knowledge of their risen Lord.

Were these disciples lost?  Well, they had definitely lost their way somewhere along the road, but with the exception of Judas, all were given an opportunity to get back on the path that led to life.  They jumped at this second chance, and each remained faithful till the day of their death.

So, are we to say that faithfulness is what prevents a person from being lost?  That would definitely thin out the genetic pool that will make it through the Pearly Gates.  But faithfulness to what?  Suppose you live in some section of the world that knows — or cares — very little, if anything, about the Christian and his ways?    Shall we consider the possibility that God has completely lost track of the Chinese mountain people?  Could the fundamental Muslim be so entrenched in his ways that he has dropped completely off the celestial radar? Is anything like that even remotely possible?  I doubt it.  Remember, "God so loved the world that He gave His only …."  Jesus didn't come into the world to save the righteous (if there is such a person); He came to heal those who needed a doctor.

I have believed for a long time (and the belief appears to be getting stronger with time) that the worse we are — I mean the more sinful and troublesome we are — the closer God gets to us, not to hurt us … but to save us.  I get a picture in my mind of this bright red "X" that lights up on the radar screen once we get in range.  The call goes out, "Man overboard!  All hands on deck!"  Every effort is made to get the drifter into the safe, dry lifeboat.

There's another word we'll have to kick around another time: "saved."  Who are "the saved"?  And how do they get that way?

I'm not sure any of these questions are any clearer than they were.  maybe in your mind they didn't need to be asked in the first place.  Perhaps you're right.  For now this conversation is sounding far too preachy and intellectual.  And that really doesn't suit me — at all, so I'm going to hang this up here.

I completely lost track of time for a while there.  Whole lotta losing going on.