"Thanks, But No Thanks, for the Memories …"

I've thought long and hard about what memories I should like to keep throughout eternity; and I have to be honest, there are a few, but there really aren't many.  Even during my best of times, somewhere out there many poor souls were suffering under some burden or other.  As a child, while I was celebrating a birthday, eating cake and tearing open presents wrapped in brown paper and tied up with string, some poor urchin somewhere on the planet was one morsel of food away from perishing.  As I slept long in my cozy bed because I had nothing better to do that particular morning, some unfortunate wretch somewhere on the planet was throwing wet cardboard boxes together to make a home on the hard ground.


Without a doubt, I am grateful to God that He doesn't appear to regret my existence, and I shall be happy to one day stand humbly in His presence.  But I imagine there will come a day when He will be happy for me to lift up my head, quit whining, and live like He intended me to live — noble, elevated, intelligent.  Yes, forever grateful — but not spending my days weeping over what I was delivered from.

I have no desire to remember how pathetic my behavior has been on this planet.  Seriously, some of you reading this have known me a long time and can testify to how selfish I was as a teenager.  I have a cousin still in my orbit who knew me when I lived in London as a child.  Talk about a child who kept alive the art of eye-rolling …. 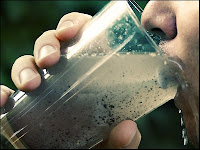 Recently the drinking water filter under the sink in our kitchen gave up the proverbial ghost and offered up water which was … shall we say … less than wholesome.  Because of the old-fashioned manner in which the filter had been plumbed in, I had to completely install an entirely different system (and that's cutting a very long story very short).   A week after starting the venture, I finally got all the parts I needed (to say nothing of the time necessary for the unreasonable parts of the job) and enjoyed the first glass of some of the finest water I had tasted in a long time.

The thing about filters (those that filter out the things we shouldn't ingest) is that they make wholesome that which otherwise would be harmful to us, by capturing and containing the ingredients that would normally be hurtful.  There are, of course, many levels of straining.  Some products are not much better than an average coffee filter, while others (usually quite expensive) remove even micro-ingredients from the solution being filtered.  Some filters, such as some high-end charcoal filters, will remove just about every molecule from the water with the exception of the H20 itself.  It's amazing. 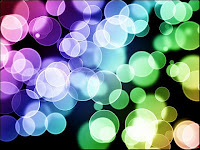 There are other kinds of filters designed to screen out what's known as "noise" from the electromagnetic spectrum, be it what we know as sound or light.  These kinds of filters are intended to clean up what information gets to the end user.  In my mind's eye I can see a switch on an old DJ record deck I used to use; it was a switch for what was known as a Scratch and Rumble Filter.  Kids today would have no clue what that meant.  And that's okay — who cares? — right?  There are also filters for use on a camera that will produce a picture that is entirely red; others designed for blue pictures.  The list goes on, including many of those that can be found on motor vehicles.

Somehow, in the Great Out There, God and holy angels are able to have their senses constantly bombarded with the presently existent evil and not be hurt by it.  Perhaps they have, in a sense, filters installed which prevent the dirty particles from getting to their vital systems.  These would have to be some serious filters, beyond anything we mere humans could invent; because if we could have — we would have, don't you think?  If this picture of a filter system is anything near the reality, I imagine that this will be the only way I could possibly agree to retaining any of the memories that make up who I am.  To have to start each day with all the memory of the pain on this planet — even during my own short lifetime — would not seem like much of a blessing to endure throughout eternity.  To have to live in Paradise, with fully-functional headgear and all the known (and beyond) senses working at maximum efficiency, with the hard drive still loaded with all this crud, would not be my idea of bliss … unless my vital systems can be shielded from it.

But maybe — and this is a big maybe — maybe I and others like me will simply serve as inoculants in some celestial fashion.  I'm reminded of a sentiment I once saw on a poster … goes something like this: "Perhaps the only purpose of my life will be to serve as a warning to others."  Maybe I will have the awful privilege of shining as a cosmic lighthouse, eternally warning travelers to keep away from the rocks.  Time will tell.  I have a sense that even in that capacity I would be happy; though right now it doesn't seem like it would be much fun.

The human mind is probably nothing at all like an electronic computer — except in principle.  In other words, there needs to be long-term memory, short-term memory, and there needs to be a system of logic in place for processing all the information entered into the computer.  Human beings invented the computer based on observable science; the idea didn't drop out of the sky.  Where our minds would benefit from being more like a computer is in the realm of anti-virus capabilities.  Evil and wickedness are full of malicious code designed to bring us down, or cause us to crash.  Once a part of us gets stained by these entities, it's not long before the whole operating system gets corrupted.  Everything may look fine on the surface, but the malware in the machine is now benefiting someone else.  Antivirus software — the Bible, in the world of the Spirit — is a must in this day and age.  Without it there is no safety whatsoever.

A little by the by here: if you completely fill a new hard drive with all the information it can hold, it will make no measurable difference to its weight when it was empty of data.  The same goes for the human brain; a person can read an entire book and more, and will do nothing to increase the weight of the brain — at least as far as we can tell.  So what does all that mean?  No idea.  Just thought I'd throw it in.  Maybe it will mean something later on.

For now I am thoroughly convinced that there is very little I should like to remember on the other side of all this.  I would like to remember the ones I love and why I love them.  I'd like to keep fresh in my mind the times when God stepped into my awareness and changed something for the better.  I feel I would like to remain appreciative of the many blessings I have received from observing some of the simple things of nature, though on the other side, I'm not sure how much benefit there will be in comparing the Kingdom of Heaven as "Like Unto …," since we will have a front row seat observing exactly how the Kingdom of Heaven is.  We'll have to wait and see.

I'm not sure how much I will be required to remember forever;  But if I have a choice, I'd be happy to let most of it go.  If God needs permission to wipe away everything that causes tears, pain, death, sickness and sorrow, then He has my permission — wipe away.