"Living Our Way To Hell"

What an ominous title: "Living Our Way To Hell."  What in the world is THAT all about?  Well, I should first state that the hell I'm talking about is the one that shows up, not after our life is over, but in our old age at the end of a life of not taking care of ourselves when we were younger.

The human body is a remarkable testimony to the powerful resilience of nature.  It seems like most of us, when we are young, can cram just about anything into our mouths — fatty; sugary; greasy; whatever — and barely gain an extra ounce.  Of course, that's not true for all kids; some have a real battle with weight gain or obesity, brought on by … what? … a high fat, high sugar diet; an inactive disposition?  Perhaps.  No matter how we feed ourselves, not all of us are blessed with the figure of Farrah Fawcett or Hugh Jackman, and so we usually spend a bit of time in the gym working out, or at least being active on the tennis court or soccer field.  The temptation for the skinny to be judgmental about the more heavily built is often quite strong, and sometimes causes the latter to retreat into the shadows and comfort of another box of snack crackers.

The way the majority of human beings make their exit from life is not usually a pretty sight.  We are generally far from home in some hospital or nursing home with tubes and wires coming out and going into various points on our bodies.  One by one the organs of the body shut down, while basic bodily functions cease.  The real unfortunate ones leave this world gasping and choking for air.  Those in agony are eased from consciousness by morphine or some other pain-relieving medication.  The scene is never attractive; the details rarely make it to the evening news.  And loved ones witnessing the demise must sit helpless until the ordeal has passed.  This picture is the hell I am referring to.

For many people on the planet, having access to good nutrition is a pipe-dream, and so far from reality that it almost borders on the hilarious.  If some of these people make it past childhood, THAT is a miracle.  But I'm not really making reference to this group of people.  I'm talking about those of us in the western world who DO have access to good food; we are also intelligent regarding the dangers of drugs, alcohol and tobacco and … junk food — at least we think we are.  Many of us have a vague notion that not taking care of ourselves is a bad idea, but we'll worry about it later; right now we have pretty good health, and we'll get more concerned when we get sick — or something like that.

You and I have been dropped into a world where doing the right thing appears to get less and less convenient as time goes by: Recycling — the sensible kind — can be a messy affair.  People who live in the country are more likely to have a compost pile somewhere in the yard; but keeping track of everything that should go on that pile can be a pain … and smelly … and messy.  If you live in town?  Not so easy.  If you live in a large city?  Forget it; you're more likely to be arrested for doing something so unhealthful.  Mind you, in the cities, it's a little easier to recycle cans and bottles; but not so much in rural areas.  The same with paper and cardboard.  But all these are food for another discussion (pardon the pun).

Getting hold of good food has become somewhat of a nightmare, depending on who you talk to.  We've got additives this and colorants that, and then there's the genetically modified variety of foodstuffs.  I read somewhere recently that a half pound of hamburger meat can contain flesh from more than one hundred different cows.  A gallon of milk can have more input than that.  Almost all vegetable products sold are protected and preserved with a cocktail of chemicals that requires handlers to wear special protective clothing.  What's a person to do?  Well, what most of us do is what everybody else does: buy what's available.  There's only so much you can do in an effort to do the right thing — at least where food is concerned.  A little by the by here, it's interesting to note that some of the best foods appear to be used in shampoo, body wash, hand cream or dishwashing liquid.  Seriously, go look in the kitchen and bathroom.  Many teenagers will put cucumber on their face before they'll put it in a salad, if, in fact, they take time for a salad at all.

Most of us would do well to get off the couch and get outside — a lot more than we do.  Of course, it's not always convenient (there's that word again) to deal with the heat … or the rain … or the cold, or whatever.  If you are aged and live in the city, especially in an apartment building, you are even LESS likely to get outside.  You would do well to get a dog, something that requires you to get moving in the fresh air at least once a day.  Inactivity is often the body's worst nightmare.  Everything gets thicker when we don't get things moving: the blood, the stool, the waistline.  When the circulation is poor, every nook and cranny of the body suffers.  Very few of us look far enough ahead to see that the way we live will pretty much determine the way we die, barring some tragic accident.

Unless the Ponce de Leon should be resurrected to continue a more successful quest for the Fountain of Youth, we are all going to die one day.  For some of us the event will be, dare I say it — uneventful.  But not so for most of us.  Those of us living out our natural years are most likely going to be taken out by something that creeps in the back door; something we aren't looking for, haven't planned for, and most likely — don't expect.  We've all lost loved ones who have gone long before their time; I'm familiar with many, many people who died of cancer who never smoked a cigarette in their lives.  Yep, injustice seems to have no favorites; it shows up just about anywhere.

If we haven't thought much about it, we should recognize that there are elements of life on earth that are almost totally out of our control, and about which we are completely ignorant.  Living healthfully is not a guarantee of good health, neither is it a surety that no biological imbalance will latch itself onto you.  But the odds sure do get stacked in your favor.  Life on earth is treacherous, made more so by the unhealthful practices of others, over which you may have little or no control.  In spite of the abundance of health education available, intelligent people still do stupid things.  I'm told it takes eight years in school to become a doctor.  Eight years!  Doctors are not dummies; it takes patience and brain power to get one's head around the physiology of the human body.  Yet these brainy people can be just as easily taken in by some addiction or other: alcohol, tobacco, illegal drugs, junk food. 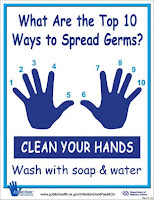 I am familiar with a surprising amount of healthcare professionals who seem to put no practical trust in the simple practice of washing the hands — especially after touching things in and around the toilet.  You see the signs everywhere, and bottles of antibacterial this and that are freely offered in public places, essentially because the World Health Organization has recognized that most germs and viruses are passed around by hands.  Washing the hands, of course, is not going to kill everything bad out there; but perhaps it's a lot like airport security — you won't catch all the bad guys, but at least you can thin them out a little.

Applying a little temperance to our lives; eating as well as is available; keeping things moving — all these and others are more likely to help us bow out gracefully and with dignity, because usually, when our expiration date arrives, circumstances are not pretty to watch.

No, I don't believe people go to Hell because they don't take care of themselves.  Hell will come to us … and it probably won't be worth videotaping.